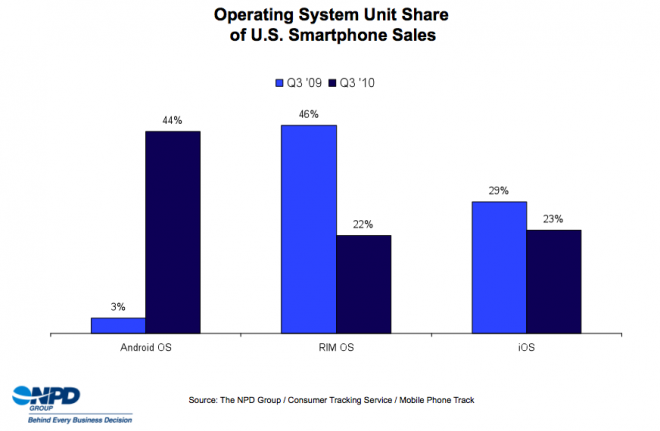 NPD just recently released their newest report about the big guns of the smartphone market, and if you’ve yet to see the trend forming, this report will easily show you what’s going on – spoiler, Android is the big winner. The 3rd quarter of 2010 saw Android skyrocket, BlackBerry sliding, and Apple surfing on flat waters.

In the 3rd quarter of 2009, Android only held 3% of all smartphones sales in the US. As you may remember, the Motorola Droid was released in the beginning of the 4th quarter of 2009, a major reason behind the relatively low share for the Google mobile operating system. Also in the same quarter last year, RIM saw smooth sailing with 46% of US smartphone sales. Oh, how much difference a year can make. Apple held a good chunk as well, nabbing 29%.

Fast forward to today, and this chart has been altered dramatically for Android and BlackBerry. Google’s mobile OS accounted for 44% of all smartphone sales in the US the past quarter, as Blackberry dropped to arelatively meager 22% of US smartphone shipments. Year over year, Android is up 41%, with BlackBerry falling 24%. Apple, however, didn’t see anywhere near the dramatic changes the previous OS’ saw in the past quarter, and nabbed 23% of the market, down only 6% from the same quarter last year. Android sold nearly double the amount of smartphones as Apple, and that’s a truly stunning accomplishment. What’s more surprising is that Apple just slightly outsold the amount of BlackBerrys in the last quarter.

Even with Android’s rise, Apple and RIM held onto the most popular individual smartphone sales. Android is sold on multiple carriers, each of which carries multiple phones running the OS. In that aspect, it’s almost not fair, but this is a numbers game, and Android clearly has the advantage according to these new numbers. We expect this to shift dramatically once a Verizon iPhone does hit the market, but we don’t believe it will completely halt Android’s success.

The landscape itself is set to change with the introduction of Windows Phone 7, and with new WebOS hardware on the way, but we’ll have to wait and see how the adoption of these new OS’ go. For now, and likely for sometime in the future, the biggest competitors will remain Apple, Google and RIM. Even with so much competition coming out of the wood work, these three mobile giants aren’t going anywhere anytime soon.

We’re sure that Apple certainly doesn’t like these numbers, and hopefully they learned their lesson when they decided to throw in some iPod sales numbers into a smartphone sales chart. Don’t bring a software stack to a hardware sales fight.

Apple iPhone 5 could use NFC for remote computing

We had heard rumbling before that Apple would use Near-Field Communication technology with its iPhone for things like mobile payments...