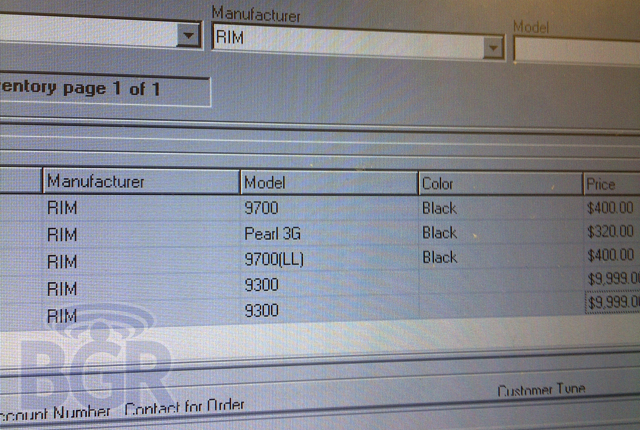 We already had a pretty good feeling that the BlackBerry Curve 3G 9300 would be coming to Canadian carrier Wind mobile, and today we’ve got some added confirmation. This internal inventory screenshot shows two 9300 placeholders keeping the Curve 3G’s spot warm until launch (perhaps for two colours?). There’s still no pricetag, but as an entry-level handset, we can expect it to be significantly cheaper than Wind’s other BlackBerry, the Bold 9700.

The BlackBerry Curve 3G 9300 adds a few new features to the BlackBerry 8520, like GPS and 3G, but is otherwise exactly the same: QVGA display, Wi-Fi, optical trackpad, top-mounted media keys, and a 1150 mAh battery. The biggest differentiator from the older model is that the 9300 will be upgradeable to OS 6 when the time comes. Mobilicity is offering the handset on the same bands, while Rogers, Bell, and Telus have their usual on-contract versions available for it as well.

Wind’s latest addition was the Motorola XT720, which was a high-end and relatively expensive Android handset. When you’re dealing with no contracts, costs for devices outright can seem high enough since they’re not subsidized, so I can hardly blame Wind for jumping on the cheaper Curve 3G. How they price it will be the deciding factor in how well it does, but Wind will be able to beat Rogers if they can keep off-contract pricing under $400 (which shouldn’t be hard since Wind is already charging that much for the Bold 9700).

If you’re through with the Big Three and want a cheap contract-free BlackBerry from Wind, be sure to check out our review of the Curve 3G 9300 to see if it’s up your alley.

Last we had heard from the government of India regarding lawful interception of BlackBerry data is that they had partial...