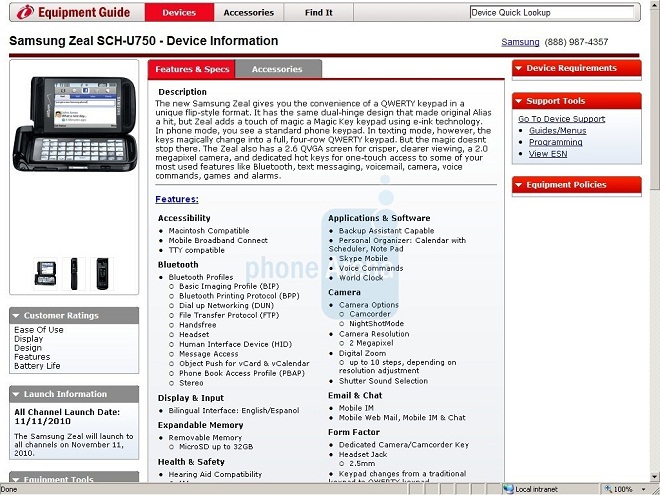 Our friends over at PhoneArena have nabbed some leaked pages from Verizon and this indicates that the Samsung Continuum, Zeal and the Motorola Citrus will be hitting the nation’s largest carrier Nov. 11.

We’ve already heard about the Samsung Continuum and it’s an odd Galaxy S device which will have multiple screens. You’ll be a 3.4-inch Super AMOLED display and then a 1.8-inch ticker which will display ambient information without having to turn on the main device.

Like the other Galaxy S devices, the Samsung Continuum will have a 1 GHz processor, 5-megapixel processor, 720p HD video recording and it should launch with a customized version of Android 2.2 – look for TouchWiz 3 to be layered on top.

There have been reports that Samsung is preparing a Google Nexus Two device that will debut next week but the company has denied that. That means the Android-powered Continuum could be the star of Samsung’s media event Nov. 8. We’ll soon find out one way or another.

The Motorola Citrus is an entry-level device that’s aimed at first-time smartphone buyers. With its 3-inch QVGA display, 3-megapixel camera and WiFi and 3G, the specs aren’t going to blow you out of the water but you’ll be able to use it with Verizon’s new, cheaper data plans.

The Samsung Zeal is a feature phone but it has an interesting claim to fame: the flip-out phone has a virtual QWERTY keyboard on the bottom which uses e-Ink technology, the same technology which powers devices like the Amazon Kindle. Other than that, it seems like your standard feature phone with a 2.6-inch screen, 2-megapixel camera, Bluetooth, Skype Mobile, and various mobile e-mail and instant messaging capabilities.

So, any of you excited about these new handsets? I’d say the Continuum could be an exciting device but I’m not sold on the double-screen setup yet.

Are you the type that buys carbon credits or recycles every last bit of material in your home? The Samsung...