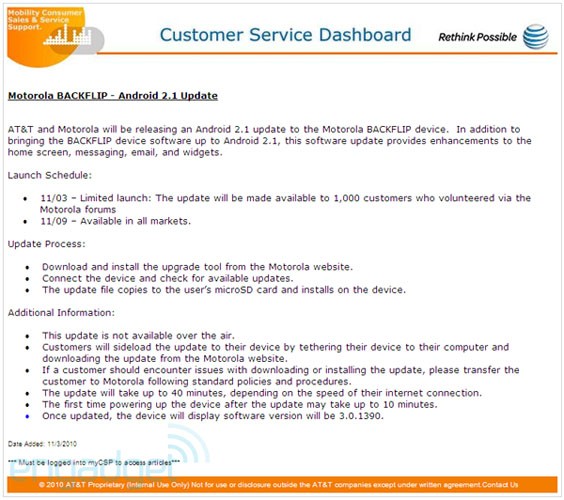 After just a little bit of waiting, the Motorola Backflip update to Android 2.1 (Eclair) has commenced on AT&T for a small group of volunteers, and should be reaching all markets in the U.S. by November 9. We can only hope that international releases of the Backflip will get Android 2.1 in short order too.

The Motorola Backflip is a mid- to low-range Android handset with a funky form factor and rear-facing touch panel. It has a full QWERTY keyboard, a 3.1″ HVGA touchscreen, a 5 megapixel camera with flash, 2 GB of on-board storage, Wi-Fi, GPS, and 3G. Sadly, at launch the Backflip was only running 1.5, along with a bunch of customizations centred on social networking. 2.1 will bring all sorts of good stuff, like camera improvements, Google Navigation, live wallpapers, extra home screens, and a bunch of other stuff. Take a look at our Evolution of Android feature for a good run-down.

Between carrier testing and Motorola ensuring their custom Motoblur layer works on the new version of Android, it’s no surprise that the update has taken so long. Despite the similar hurdles faced by other manufacturers, it’s surprising to see fragmentation has still been kept reasonably low.

Take a look at our Motorola Backflip review and just imagine how much better it would be with 2.1.

T-Mobile had a solid third quarter with 137,000 new net subscribers thanks to a strong performance with its smartphones like...