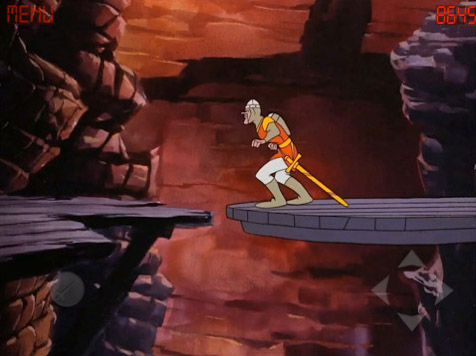 Don’t know about you, but I used to enjoy playing Space Ace and Dragon’s Lair on my Amiga “back in the days.” Sure, the gameplay was sucky — all you had to do is move your joystick to the right direction and the main character (Dirk the Daring or Dexter) would do the right thing — but the graphics was awesome. At least I liked the cartoon-like look and feel of the game, but let’s face – one got bored quickly playing it.

That said I can’t recommend Dragon’s Lair too much, but then again you’ve probably spent 5 bucks on something even more stupid – I know I have. So if you look to bring back some nostalgia on your iPad, now’s your chance.

Already available for the iPhone and iPod Touch, the game has been optimized for the bigger screen of Apple’s tablet. The graphics is enhanced and you’ll love it — again, at least for some time until you get bored. But you’ll definitely play it in front of your friends again and again. I did that. 😉

The iPhone is the most popular platform for developers right now, and that's no surprise. Up until recently, the iPad...