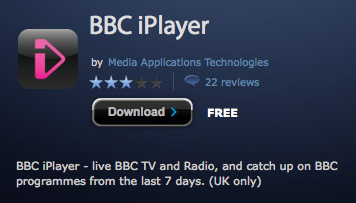 If you’re in the UK, and carry a BlackBerry as your daily driver, the BBC iPlayer app for BlackBerry is now available for you… Well, almost.

Turns out this isn’t much of an application at all, but rather a desktop launcher that opens the iPlayer website. Disappointing for sure, but I suppose this does remove one step from the equation. Download and install this one, and you’ll have a nifty little icon on your home screen that is easily clicked and launched at any time.

That said, if you’re big into the BBC and want to catch up on your favourite TV and radio shows, you might as well give it a download.

Important Notes: Before you get all excited, the BBC iPlayer app (er, launcher) requires OS 5.0+ on one of the following devices: the 9520, 9550, 9700 and 9800. If you have one of these devices you should be good to go, as BBC iPlayer is supported by all carriers in the UK. It should be noted that some issues have been reported with OS 6. If you’re on a newer BlackBerry with OS 6 installed, be sure to let us know if you encounter any issues.

Evernote for Android 2.0 gets a new UI and tons of features, offline notes included!

Evernote has updated its Android client which is now pretty much on par with its iPhone counterpart, if not better....