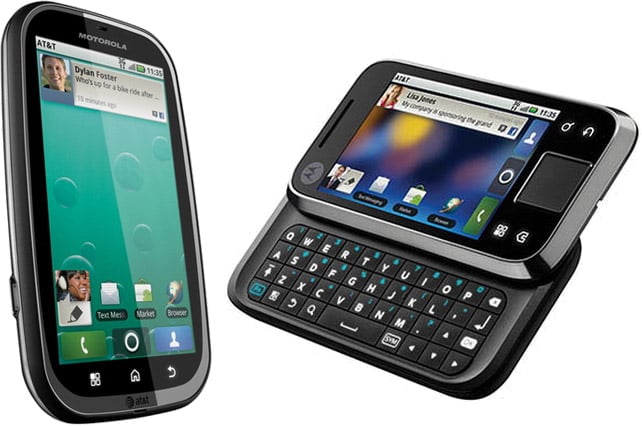 Two Motorola smartphones that were announced during this year’s CTIA, Bravo and Flipside, are now available at AT&T.

The first of the two (Bravo) is an all-touchscreen device with a 3.7-inch 854×480 pixels touchscreen, HSPA and WiFi connectivity, GPS, Bluetooth, 3-megapixel camera, 800MHz CPU and a microSD memory card slot. AT&T is asking $129.99 for Bravo on a two-year contract, or $429 without any commitments.

As for the Flipside, it comes with a side-sliding QWERTY keyboard making it ideal for heavy SMS and instant messaging users. However, it also has a smaller 3.1-inch HVGA touchscreen and again HSDPA, WiFi and 3-megapixel camera. It could be yours for $99.99 if you sign a two-year agreement or for $399.99 sans any contracts signed.

Of course, both phones rock Motorola’s own MOTOBLUR UI that runs on top of Android 2.1, while providing quick access to the popular social networking services like Facebook and Twitter. No word when these two will get the Android 2.2 Froyo update, though…

Gameloft announced that it will support the Samsung Galaxy Tab by bringing its popular titles to the South Korean company's...