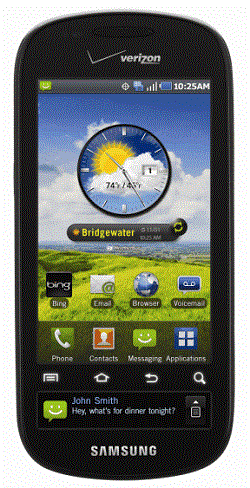 It looks like our rumor was right, as Samsung has officially confirmed that its Android-powered Continuum will be landing on Verizon Nov. 11. You’ll soon be able to get some dual-screen Galaxy S love.

The Samsung Continuum will be the latest Galaxy S smartphone and it will come with the features you’d expect form that line: 1 GHz Hummingbird processor, WiFi, 3G, Bluetooth, GPS and a 5-megapixel camera with 720p HD capabilities.

The cool thing about the Samsung Continuum is that it will have a 3.4-inch Super AMOLED screen with a 1.8-inch secondary display that will be called a Ticker. This additional screen is meant to display things like missed calls, e-mails, notifications or even show off your RSS reader without having to power on the main screen. It’s an interesting idea but we need to spend some more time with it to see if it’s more than just a gimmick.

The Samsung Continuum should launch with Android 2.1 (not Android 2.2, like we wanted) that features a custom skin known as TouchWiz 3.0. This brings a lot of visual polish, additional features in the notification bar and more. Let’s just hope it’s not as buggy as the version that was found on the Samsung Fascinate.

It will also come with Bing preloaded, DLNA support and an 8 GB microSD card. The device will be available for preorder this Thursday and it will land in stores Nov. 18. As expected, the handset will cost $199.99 with a new, two-year contract and a mail-in rebate.

Samsung is holding a media event in about an hour, so keep it tuned here because we’ll give you all the latest details. There were rumblings that the company could have a surprise or two besides the Continuum.