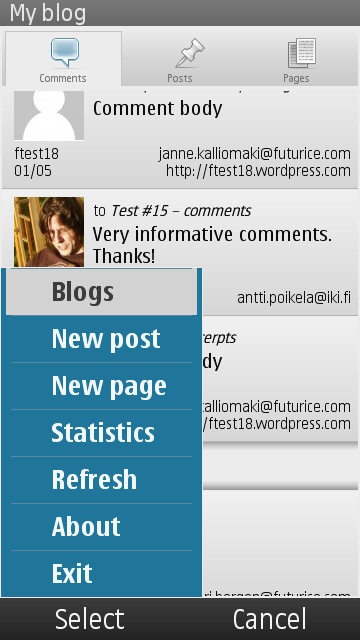 If you’ve ever been in a situation where you’ve wanted to tell the world about something, and Facebook or Twitter wasn’t the way you wanted to blast your thoughts out into the internets, then you’re probably a blogger. Chances are that if you blog, you use also WordPress. Their native application has been available on the iOS, Android and RIM platforms for a while now, but what about Symbian? They do have the largest smartphone market share after all, so what gives? Well the wait is now over. WordPress for Nokia devices has officially been launched and it’s written in Qt, meaning the latest Symbian^3 devices, such as Nokia’s N8, C7 and C6-01, are supported.

You’ll obviously be able to post on the go, but other features include being able to moderate comments, check your statistics, because you know more page views mean more people love you, and also upload photos. Anssi Mäkelä, who is not only the head of the project, but also a good friend of mine who I’m sad to say is leaving both Nokia and Finland said: “First we made a clear decision to cover most of the current and upcoming platforms, so it was pretty obvious that to meet this demand Qt was the only way to go. This app is extraordinary when it comes to performance, especially on latest Symbian^3 devices its unbelievably fast and responsive to your commands.”

Here’s a tip to those of you new to blogging: Pick up a pen and paper and write out what’s bouncing around in your head, then the next day edit the hell out of it, and if you’ve got enough energy left over just sit in front of a computer and put it into digital format. I know that sounds old school, but it’s how I personally do some of my best work.