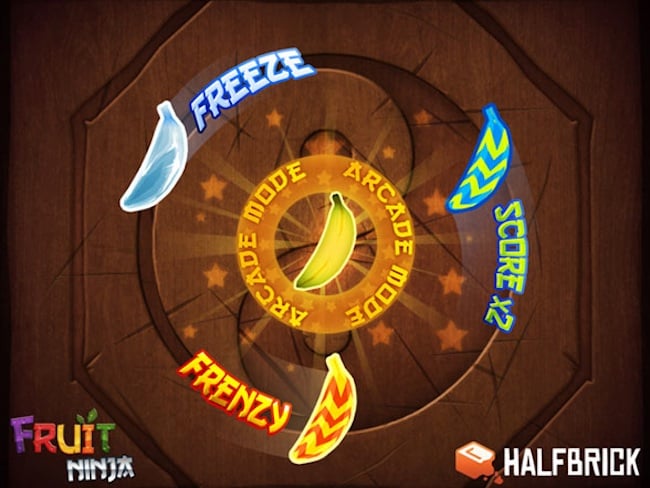 One of Halfbrick‘s first iOS title, Fruit Ninja, has certainly been getting a lot of love from the developer that’s been adding a ton of new content to the game lately. A couple of weeks ago, they released an update that allows for multiplayer games over Game Center, as well as full support for Game Center with leaderboards and achievements. Now Halfbrick has added a completely new mode to Fruit Ninja that takes the well known gameplay mechanic of slicing up fruit, and puts a spin on it.

The new mode for Fruit Ninja is called “Arcade Mode” and what it does is it has players playing for exactly 60 seconds to achieve the highest score possible. The mode is a departure from the classic Fruit Ninja mode as it relies on time rather than possibly slicing a bomb to end the game.  Arcade Mode throws in a few bonus colored bananas into the mix which offer three kinds of powers to activate during play: Double Points, Frenzy, and Freeze. Double Points allows for… well, double points for a short amount of time. If you slice a banana with a Frenzy power-up, then the game will suddenly be littered with fruit for you to cut up. The Freeze power up does what you expect it to – it slows down time so you can accurately cut all of the fruits on screen in order to reach a high combo number. The power bananas can also be stacked up upon each other, so having a double points, frenzy, and freeze power up activate all at once is certainly possible.

If you own Fruit Ninja for the iPhone, then you should be receiving this mode the next time you update the game. If you don’t, then this would be a perfect time to see what all the fuss is about as the game is selling for only $.99.

Speaking of Halfbrick, have you checked out my review of their other iOS titles, Age of Zombies and Monster Dash? You have?! Well, did you know that every time you read one of my reviews, an angel gets her wings? Yep, that actually happens.

AVG Security has just purchased the Android app maker DroidSecurity and the move is another indication that mobile security is...