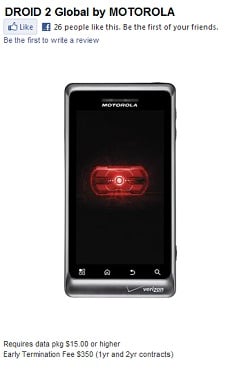 We knew it wouldn’t be too long before we saw the Motorola Droid 2 Global in Verizon stores and the Android-powered handset has finally gone live on Big Red’s website.

As the name suggests, the Motorola Droid 2 Global has some GSM chips in it to enable travelers to roam in overseas markets. This could especially be useful for business travelers or for people who know they’ll be outside the United States for some time and don’t want the hassle of having to use a different phone when they’re abroad. As you know, Verizon uses CDMA technology for its phones and that is rarely used in other markets for cellular service.

Verizon could have just stuffed in some GSM chips in a Droid 2 and called it a day but the handset actually has some boosted specs. The Motorola Droid 2 Global has a 1.2 GHz processor, which should make this a smoking-fast machine.

Other than that, the Motorola Droid 2 Global is basically the same device as the D2 we reviewed. It will come powered by Android 2.2 with some light, custom skinning, a 5-megapixel camera, Adobe Flash player, a 3G mobile hotspot option and a full, slide-out QWERTY keyboard.

When I reviewed the D2, I said, “The Motorola Droid 2 is a solid Android smartphone that does a lot of things right but it’s not a monumental improvement over the original handset. The revamped keyboard, boosted internals and Android 2.2 out of the gates are much appreciated but I don’t know if it’s enough to rocket this to the top of your must-have list.”

I do think that the boosted processor and the global-roaming capabilities do change how you have to look at the device, as this is probably the best Verzion handset that you can take overseas.

The Motorola Droid 2 Global is available for order now and it will cost about $200 with a new, two-year contract.