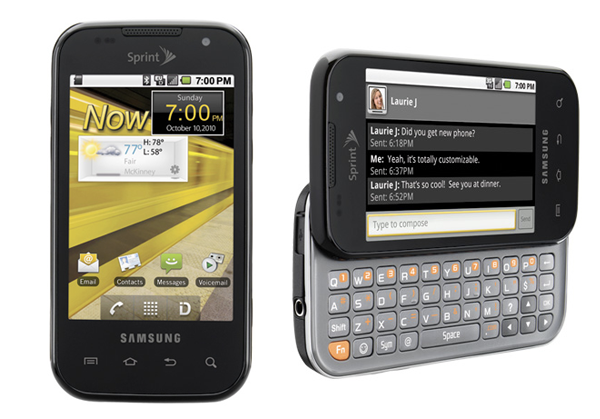 The Samsung Transform isn’t like other smartphones recently reviewed by IntoMobile, which have been particularly exciting in the last few months. It seems like every week we are blessed with a new phone sporting the latest operating systems like Windows Phone 7 and Android Froyo 2.2, technologies like 4G and mobile hotspots, cameras with more megapixels packed in, faster processors, and excessively large screens.

For every “superphone” introduced and coveted, there will soon be a dozen adequate phones powered by last year’s hardware. This lower class of smartphone will significantly increase in number as more people make the leap into the smartphone lifestyle. The Samsung Transform is a prime example with its low resolution screen, limited storage, slow processor, and unimpressive camera.

However, the Transform has one exciting feature which ironically isn’t from Google or Samsung; it’s from Sprint. Sprint ID takes the guesswork out of which apps, widgets, ringtones, and wallpapers from the Android Marketplace you should download first. With what seems like an infinite number of customization options available, personalizing your phone may feel like a daunting task. Sprint ID can jumpstart your smartphone experience without requiring you to waste lots of time perusing the “ever-expanding” Android Marketplace. Twenty downloads and installations drops to one. 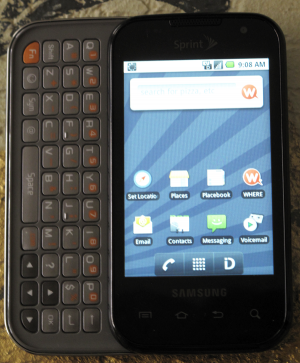 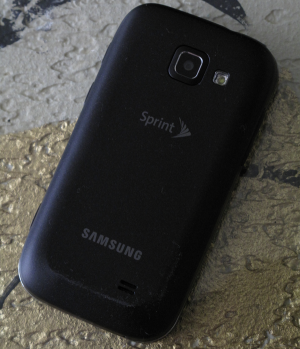 The Samsung Transform sports a decent feature set, but it won’t blow your mind. Yes, it may have dual cameras, but the primary one is limited to just 3.2 megapixels… the same number of megapixels that the iPhone had… in 2008. It may have a decently large screen at 3.5 inches, but its resolution doesn’t do the Android UI justice. It’s the same resolution the original iPhone had… in 2007. Before you get upset you should know this review won’t be a straight Transform to iPhone comparison. That would be obnoxious. You should just be warned that the Transform’s hardware isn’t going to qualify for “superphone” status. But then again, Sprint and Samsung never intended the Transform to be the highest-end Android phone available today.

The Transform is powered by a relatively slow processor and limited RAM. Basic tasks like opening or switching applications leaves you time to take another sip of coffee in the morning. Swiping the screen to quickly scroll through contacts also seems like a painful task for the Transform. You don’t experience the same smooth scrolling that phones with faster processors exhibit. Once you’ve opened a few apps and start switching around, the phone slows to a crawl. If you’re a power user, you definitely will want to reconsider the somewhat anemic Transform.

4.61″ x 2.42″ x .61″. No surprises here. It’s the size one expects a phone to be, unlike the gargantuan Droid X or HTC EVO 4G. Even with the keyboard slid open the phone is still a manageable size.

The full QWERTY keyboard is actually the most solid piece of the Transform’s hardware. When you’re holding the phone by the keyboard you forget that the rest is made from plastic. The keyboard slider mechanism is just as solid as the Sprint Samsung Epic 4G, which makes sense, given the similarity between the Epic 4G and the Transform. That’s not a complaint, as the keyboard slides out smoothly and with confidence.

Overall fit and finish is on par for a mid-range smartphone. In fact, were it not for the extensive use of plastics, the Transform could have been a rockstar in this department. 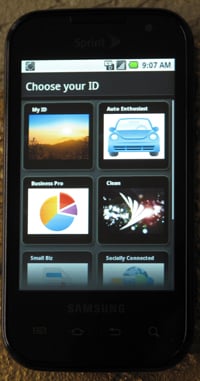 Everyone lately is talking about Android Froyo 2.2 (and even Gingerbread 2.3!). Unfortunately, The Transform comes with Eclair 2.1 and an “upgrade coming soon” caveat. This means all apps that require 2.2 won’t work with this phone. Exchange access, Adobe AIR, tethering, and portable hospots aren’t possible either. Will we see the advertised 450-500% increase in performance when the 2.2 upgrade finally arrives? That sure would be nice.

The homescreen, apps, ringtones, and wallpapers on the Transform are easily modified by Sprint ID. What’s Sprint ID? A surprisingly easy to use way to install customization packages onto your phone. With so many Android phones being sold to people who aren’t accustomed to App Stores and Marketplaces, Sprint ID allows you to quickly take your phone from a blank slate to a colorful, app-filled powerhouse. You no longer have to worry about which apps should be downloaded first. Sprint ID takes care of everything.

Below are a few IDs that are available for download.

My ID offers a serene mountain range wallpaper, essential apps on your homescreen, a Google search widget, and some guides to help teach you how to use your Android phone.

Love driving? Auto Enthusiast shows you a pristine road on your homescreen, a chronograph watch widget, and tons of apps.

You love making sales trips to multiple continents, and you need close contact with the business world. The wallpaper is Earth’s land spread across 5 screens. Slick. 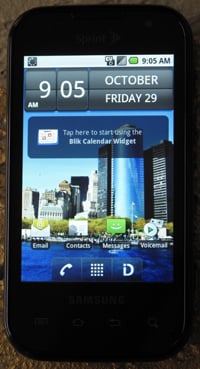 Small business indeed. You’re presented with a gorgeous line of skyscrapers across 5 screens.

Although this is the supposed social ID, it’s still missing some essential apps like Foursquare.

Clean is self-explanatory. No apps on your homescreen; black wallpaper. This should make those who dislike all of the carriers’ forced skins and modifications happy. You actually have the option to start from scratch and add exactly what you want. 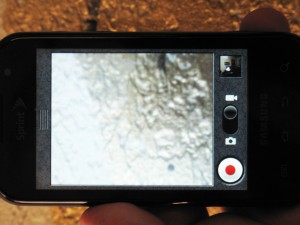 First, the camera takes several seconds to load. Second, the pictures are disappointing. Once the camera is ready to take pictures, the controls are extremely simple. All of the advanced features like flash mode, scene mode, white balance, color effect, size, quality, and focus are hidden behind a subtle sliding menu.

The primary buttons are (1) take a picture/start recording, and (2) switch between camera and video recording modes. There’s also an area showing your most recent picture which you can touch to see a full screen view. While viewing your pictures in the Gallery you can touch the Share button to send them through various installed applications. For example, when I chose to share a photo I was presented with the option to use Bump, Dropbox, Evernote, Facebook, GMail, Messaging (MMS), Picasa, Pixelpipe, Tumblr, TweetCaster, and Twitter. Of course most of those apps and widgets were manually installed through the Android Marketplace.

Unfortunately, again, with only 3.2 MP and a brutally cheap sensor, the pictures (and videos) are truly mediocre.

The Transform’s browser uses webkit just like all Android phones and iOS devices. How could it possibly be ruined? I know! Force me to use Sprint’s mobile portal until I manually change it. Oh and I can’t use the browser until I enter my phone number. That’s a first.

Watching videos on YouTube’s mobile website, m.youtube.com, is pretty fun with the phone’s loud internal speaker. There’s an option to “Watch in High Quality” (which should honestly be set by default), and the browser is tightly integrated with the phone’s Menu button. You can quickly rate, favorite, share, or leave a comment. The thoroughly loud speaker also makes Pandora fun to use.

Adobe Flash does not come pre-installed on the Transform, so you can’t watch a large (thankfully decreasing) portion of videos (and ads!) online. A quick Google search revealed two options for making Flash work: root your phone, or have one of a few specific phones running Android 2.2 Froyo. Let’s face the truth here. Flash is not for mobile. Note: While testing the Transform I installed Flash 10.1 on a Motorola Droid running 2.2. Crash, crashing, and more crashes.

Navigating music is tolerable using Android’s built-in music player. Playback is surprisingly smooth, given the phone’s tendency to become bogged down when doing some heavy multi-tasking. You can sync your iTunes library to the phone using the DoubleTwist application on your desktop, which makes it easy to transition from an iPod to the Transform. You can also set a music widget on your desktop for quick access to your tunes when on the go.

Make calls, receive calls. This is a magical concept for someone who has been an AT&T subscriber for several years now. Thank you, Sprint. Having the option to use Google Voice as the primary communication is truly awesome. Although, according to the Transform and a cryptic error message (get used to that if you are switching to Android), Sprint won’t let you use Google Voice for your voicemail. Let me get this straight. Google Voice is a Google product. Android is a Google product. Android supports Google Voice, but Sprint says no thanks? Wonderful.

The battery in the Transform is bad. The battery is completely dead by the end of the day WITHOUT EVEN TOUCHING THE PHONE. Read that again. 0 phone calls made. 0 phone calls received. 0 emails composed. I’m sure there are “task managers” that help increase battery life by quitting unnecessary applications/processes, but a reviewer (or a customer) should not have to install an app to make the phone work properly. I assume “WeatherBug Loading Data, Please Wait…” appearing in the Notifications menu all day every day is likely involved in the phone dying so quickly.

Sorry but this is a dealbreaker for Android as of right now. Task managers? That feels like using Windows 2000 again! Remember pressing Control-Alt-Delete to get to the Task Manager so you could manually kill dead processes? We’ve come a long way in the computer world. I don’t understand why we’ve regressed in the mobile world. Yes, I’m sure this is a temporary problem that Android 2.3 or 3.0 will magically fix, but for now it’s a serious problem for casual users. Try telling your parents they just need to “kill that stupid task.” Good luck.

Should I Buy One?

Are you seeing a pattern yet? If you really want a rockstar phone on Sprint, check out the Epic 4G (Samsung Galaxy S Pro). You won’t be disappointed.

Samsung had a monster quarter with more than 71 million phone shipped and it looks like it is gaining traction...