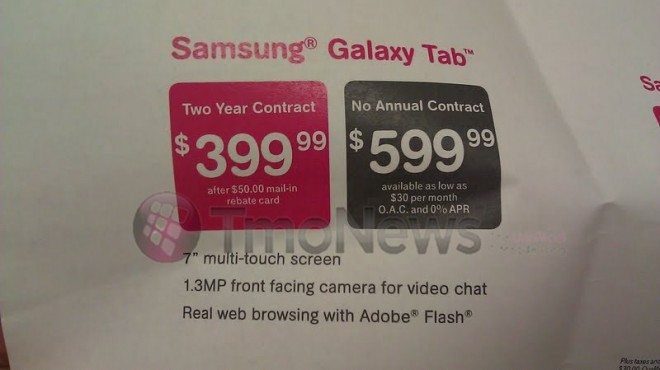 We’ve been waiting on Magenta to release their official Galaxy Tab pricing, and it looks like the previous rumors were correct. Starting tomorrow you can walk into a T-Mobile store and grab one of these bad boys.

The Galaxy Tab will run you $399 on a two-year contract after a $50 mail in rebate. If you’re looking to go contract free, the 7 inch tablet will cost $599, with the very nice option to finance the Tab for only $30 a month after a down-payment. So even if you have to drop $250 dollars down on the thing, it’ll be cheaper than buying it with a contract – although you do have to pay the remainder of the device cost in monthly payments. Why other carriers haven’t jumped on the bandwagon with this option is beyond me, but it’s certainly appealing for those who don’t want to pay $600 up front, and don’t want to be bound to a two-year contract.

For your information, the T-Mobile unsubsidized price undercuts Amazon’s price by $100.

The Galaxy Tab is certainly a force to be reckoned with, but it still may not be enough for those with an iPad, who are used to the extra screen real estate. No matter what Steve Jobs says, I think that the sweet spot is going to be around 7 inches, with 8.9 inches looking mighty appealing as well. That said, size becomes less of an issue when it comes to actual specs of a device for me, which is why I’d rather wield a 10.1 inch screen from the Notion Ink Adam with its Pixel Qi display and sacrifice the portability of the Galaxy Tab any day.

We’re still not sure how consumers will respond to the Tab, but our initial impression were rather good. It fits great in one hand, and can fit in the back pocket of your pants – not all, but many. We’re not saying you’re going to want to put the Tab in your back pocket, we just want to give you an idea of how portable it is. You’re definitely not going to be doing that with the iPad. Then again, some people may not care in the least bit, and will rock the iPad either way.

If you’re thinking about going out a grabbing a tablet sometime soon, I’d say wait. Wait until the end of CES next year. It’s actually not that far off, and we have a feeling that CES will be absolutely overrun by tablets, some of which may suit you better than the only two decent ones currently available in the US at the moment. Tablets are a growing market, and even with the iPad’s major success, we have yet to see anything yet.

Have you been sitting around in the Great White North waiting for a reason to splurge on a new Android...