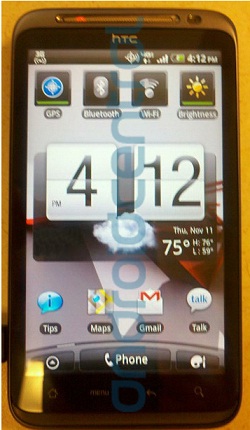 We all knew that Verizon would be landing an EVO-like device sooner or later but this latest leaked shot of a device being called the “HTC Mecha” shows off that the smartphone will run Android 2.2, have a 4.4-inch screen and it will be capable of LTE. Are you excited yet?

If you look very closely at the picture included, the data indicator says “4G” and that fits in line with what Verizon has said for its 4G LTE plans. The nation’s largest carrier plans to blanked 110 million users with its 4G LTE network by the end of the year and it said it will have a half dozen smartphones and tablets which can take advantage of this faster mobile data network.

Android Central got the spy shot and testers told them that the HTC Mecha is consistently getting 9 Mbps downstream and 5 Mbps up. That’s some pretty fast mobile data speeds and is comparable or better than other 4G offerings from Sprint and T-Mobile.

There isn’t much to go on about the specs with this new HTC handset but we’re expecting it to come with Android 2.2, the brand new Sense UI, at least a 1 GHz processor, a large touch screen and other goodies you’d expect from a high-end device like this.

Of course, the HTC Mecha name is probably just a code name and I could easily see this phone falling into the Droid family as the Incredible HD or the Incredible 4G. Verizon will be pushing its LTE network hard and you know that a Droid or two will help with widespread adoption.

We also know that Verizon will be getting the HTC Merge in the not-too-distant-future, but this device probably won’t be capable of 4G LTE speeds. It still looks like a good device though and we could get 4G sooner rather than later.

The rate at which Android handsets are being announced and released might make last week's model seem like ancient history....