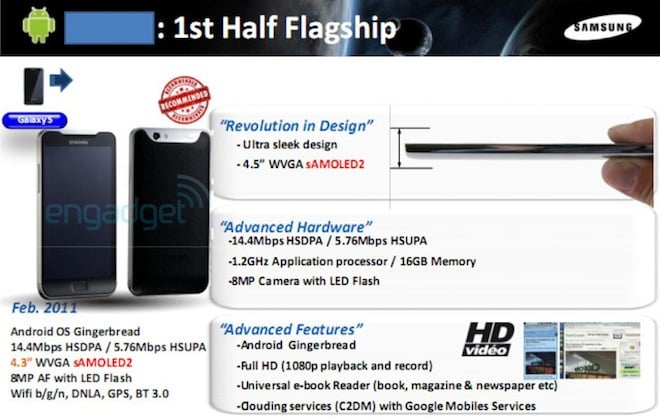 We recently wrote about the Samsung Nexus S that was leaked via Best Buy’s website, and isn’t exactly the most prettiest of devices, but don’t fret because Engadget just scored a leak of another Samsung handset due to be announced in February that packs a 1.2 GHz processor, 8 megapixel camera with the ability to capture 1080p video, 14.4 Mbps HSPA+ so you can use it on T-Mobile’s new network, 16 GB of built in storage, Bluetooth 3.0, a monster 4.5 inch screen using Samsung’s second generation Super AMOLED technology, all in what looks like an ultra thin industrial designed rectangle of magical goodness. We’re only 3 months away from Mobile World Congress, and that’s when all the latest and greatest from the handset industry gets unveiled. We’ll keep our eyes open for this puppy and try our best to stalk Samsung’s public relations folks so we can get an early hands on demo.

This new handset will probably run Google’s upcoming Android 2.3 mobile operating system, codenamed Gingerbread, and we’d like to tell you more, such as pricing and availability, but there’s no real additional information to share. Frankly, I’m a bit tired of this trend towards large screen devices. My Nexus One, with the 3.7 inch screen, felt like just the right size and now with my iPhone 4 I’m tremendously satisfied with how my mobile fits in my pocket, but 4.5 inches? Are you freaking kidding me? It’ll fit in my jacket’s breast pocket, but I’m not going to be wearing said jacket when spring and summer come around.

What say you? Are you interested in getting a device with an even larger screen or are you like me and tired of seeing the entire industry blow up devices to proportions that would have seemed laughable 5 years ago, yet today, for some strange reason, are desirable to a certain class of users?

Dell announced two Android all-touchscreen smartphones for India - XCD28 and XCD35. Both devices have not been unveiled anywhere else...