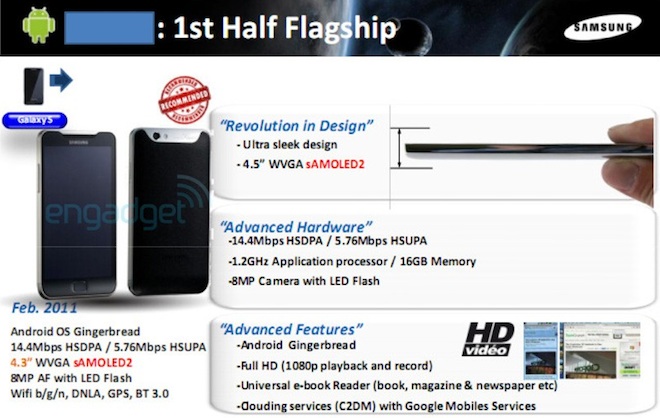 According to an anonymous source of FrAndroid, someone has come out and given some clarifications on the specifications of the upcoming/rumored Samsung Galaxy S 2.

The American code name for the GS2 is the Samsung Elite, and may hilariously enough be called the Dwarf in Europe, but maybe that’s just a bad Google Translation. If the device will be called the Samsung Elite in the US, we have every reason to believe that it will be coming to Verizon, and will be an LTE device. The GS2 is obviously the official follow-up to the original Galaxy S device, and the Nexus S likely won’t even hold a candle to the GS2, and that’s to say the current Nexus S actually will launch at all.

As far as some of the specs go for the Galaxy 2, some have been shaved down a bit. The GS2 should come with an 8 megapixel camera with a dual-LED flash, but won’t actually record in 1080p, but 720p.  While it would be nice to be able to record and playback in 1080p, it certainly wouldn’t be a deal-breaker for me, although I could imagine it may be for some.

The device is also said to come with the next generation of Super AMOLED displays, the sAMOLED2. The GS2 will apparently sport a 4.52 inch display with a resolution of 1024 x 600. It’s said that the CPU on the device is clocked at 1GHz, but will probably be bumped to 1.2 GHz when it ships. In other wavering specs, the beastly Samsung Android phone will come with either 768MB or 1GB of RAM, with the tipster on this leak leaning towards the latter.

The Galaxy S 2 will indeed sport Android 2.3 Gingerbread, although it was not named specifically, but it’s almost a given at this point that the upcoming Android phones will rock Gingerbread out of the box. It’s expected to launch exclusively at one or two French carriers in March of 2011, with a wider release coming in the following months.

So we still don’t know much about this device, but others certainly believe they do. We’re not saying anyone is wrong here, but the above is still nothing but rumor at this point. Samsung has been rushing to market, and that means some specs just are not yet final.

What do you want to see from the Galaxy S 2? We’re hoping to 1GB of RAM and the sAMOLED2 display!