A trio of photos reportedly taken by the Google Nexus S have been spotted on Picasa. The shots are obviously test photos taken by someone analyzing the camera performance of the upcoming Android device. All three photos were taken between November 5th and 6th and were uploaded to a specific test account and album on Google’s Picasa photo service. As of the writing of this post, that album is still available to the public. 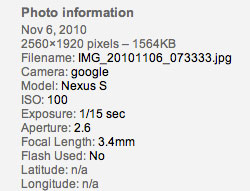 The test photos reveal very little about camera or phone functionality, but the upload resolutions for all three photos (2560×1920 pixels) suggest the Nexus S will sport a 5-megapixel camera, similar to the Samsung Galaxy S. This resolution also jives with the latest Nexus S rumored specs that broke late last week.

The official launch of the Nexus S is reportedly delayed while Google irons out some hardware kinks with the device. Obviously, the camera got a quick performance check last week, but I wonder what other hardware may be under the microscope. Whatever is plaguing the device, let’s hope it is resolved soon so we can report on some “official” Nexus S news, not just rumor after rumor.