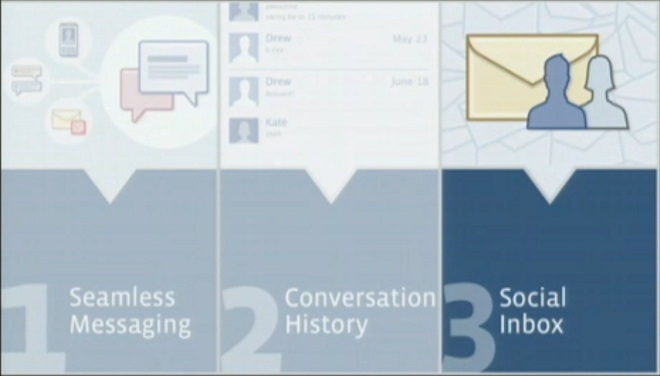 Facebook is trying to rewrite the way people communicate with each other and it will be bringing the improved Messages product to its to the Apple iPhone app.

The new Facebook operates around three principals: Seamless messaging, conversation history and a social inbox. The first is where the mobile market may play the biggest role because the new Facebook Messages will incorporate e-mail, text messages, messages within the social network and more down the road.

“This is not an e-mail killer, this is a messenger system that includes e-mail as part of it,” Facebook CEO Mark Zuckerberg said during the introduction.

The Facebook Messages will send out responses to users in a variety of ways. The system is trying to work as a conversation, so if someone is communicating with you via SMS, the response will be sent as a text message or as an iPhone app. This would also work the same via e-mail or instant messaging and the company didn’t rule out voice communication in the future.

The conversation history is aimed at giving users context about the communication methods between people. This could be useful in tracking down the tenor of the conversations you’re having.

The social inbox function of the improved Facebook Messages may be a strong spam filter, as it essentially creates a white list of approved people who can communicate with you. Spammers are tough cookies though and we’ll have to see how well the social network is able to keep out the bad guys.

The improved messaging service will be rolling out over the next few months and it will be invite-only to begin with. We had hoped that the social network was making its Android app an equal to the iPhone version but there’s no word on when this new service will be available. The updated Apple iPhone app should be live later today.

The highly anticipated Path photo sharing app has finally been released to the masses. If you're a heavy social-networker and...