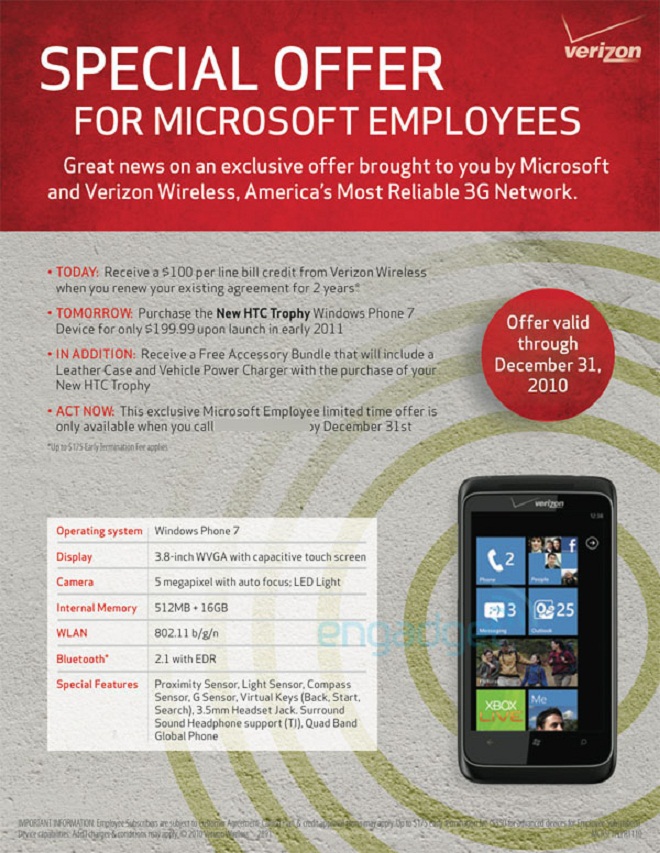 We knew that Microsoft’s Windows Phone 7 wouldn’t be coming to CDMA carriers until 2011 but a leaked document suggests the nation’s largest carrier may soon get a handset with the spiffy new mobile operating system.

The leaked document shows that the HTC Trophy will be available to select Microsoft employees for $199 on a new contract and it will launch in “early 2011.” This device will also come with an accessory bundle and it looks like the Trophy will also be a world phone, so Verizon users will be able to stay connected when they travel abroad.

The news is very interesting because Verizon downplayed Windows Phone 7 before its launch because it wasn’t carrying the platform and there was no real need for it to boast about a platform that was going to rival carriers like AT&T and T-Mobile. Sprint will also be getting a Windows Phone 7 handset in 2011 with the HTC 7 Pro.

The move is actually pretty significant because it means that Microsoft will have its Windows Phone 7 platform on all four major U.S. carriers within a few months. There can also be a lot of benefits of being a strong Verizon partner, as Android only really started to take off once Big Red introduced its Droid lineup with a $100 million advertising blitz.

The Windows Phone 7 platform is a solid foundation, as our review sums it up:

Windows Phone 7 is the sexiest smartphone OS that we’ve yet seen. It’s super model sexy. It’s got that undercover hotness factor that belies the elegance and poise of its design aesthetic. Hands-down, WP7 will give iPhone and webOS a serious run for its money, as far as looks are concerned.

It’s still lacking some of the polish of Android or Apple iOS but we’re cautiously optimistic about how well this new smartphone platform can do.

In the mean time, check out this hands-on video of the HTC Trophy.

The Samsung Fascinate is the Galaxy S phone for Verizon Wirless and the carrier has put its own spin on...