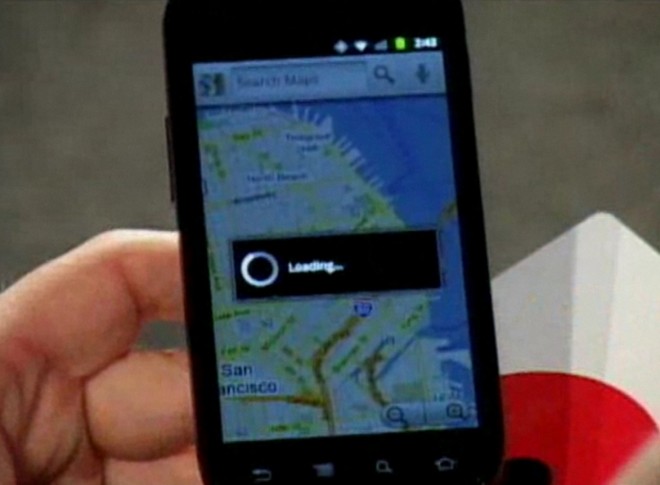 Google CEO Eric Schmidt may not have officially announced Android 2.3 today, but we did get another glimpse of the Nexus S today. Not much more is known about the handset, but we do know that it will be sporting an NFC chip inside, and Android will support it going forward.

I wasn’t really expecting a Gingerbread announcement today, as the Web 2.0 Summit just doesn’t seem big enough for an announcement as anticipated as Android 2.3 OS. But the first thing that was asked in Mr. Schmidt’s kick-off fireside chat involved Android, so I remained hopeful. We did get a vague ETA on the Gingerbread announcement, “the next few weeks” so that’s got to count for something, right?

The exciting news from Web 2.0 Summit today came when Schmidt whipped out an “unannounced device” that was undoubtedly the Nexus S to show off the NFC capabilities. The NFC demo, via the Nexus S, could have gone more smoothly, but most of us were focused on the handset itself. We just saw the Maps application searching for the most part, so there wasn’t too much to get excited for. When asked about the Nexus series, Schmidt replied with, ” I said there wouldn’t be a Nexus Two.”  A Nexus S seems to be just fine, though.

It looks like the handset is still on track, and will more than likely debut as the first Gingerbread device. We’re not sure when the Nexus One will receive the Android Gingerbread update, but we know that it will be next in line, followed by other stock Android devices. A few weeks could mean that we will actually get an announcement in December, which would fall in line with the OS version’s name of Gingerbread. It would be a nice Christmas present from Google, but we’re left wondering, “where’s our a Thanksgiving present?” That said, we can’t wait for the Nexus S to finally usher in Gingerbread.

Anyone returning their G2 or MyTouch 4G to wait the inevitable launch of the Nexus S?

Android 2.3 Gingerbread will have NFC support for mobile payments

Google CEO Eric Schmidt showed off what is likely the Nexus S and said the next version of Android, Gingerbread,...