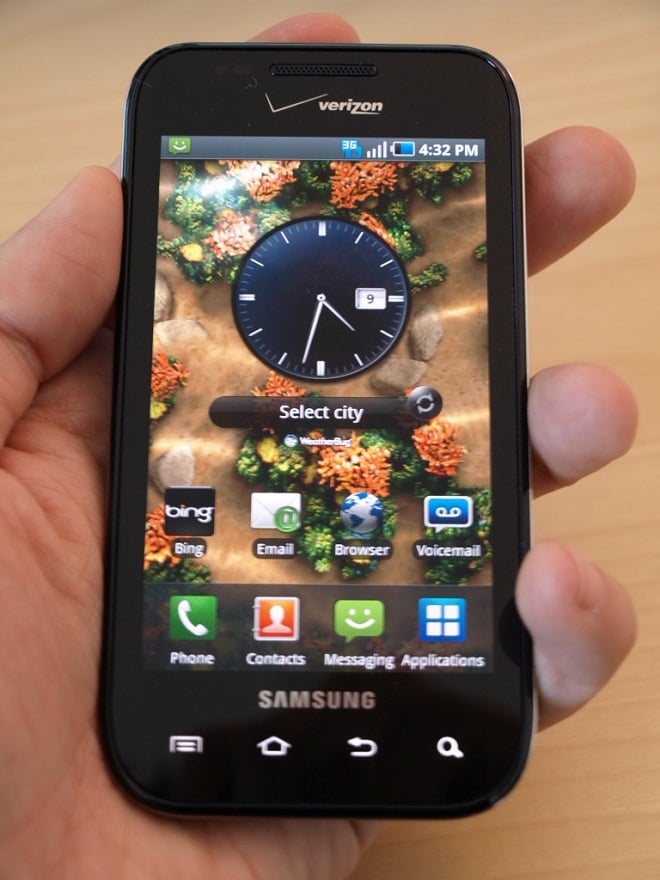 The Samsung Fascinate is the Galaxy S phone for Verizon Wirless and the carrier has put its own spin on the Android-powered smartphone. Is the Fascinate better than the other Galaxy S phones or is it just another “me too” handset?

Well, read on for a comprehensive review.

Available now from Verizon for $199.99 with a 2-year contract (various buy one, get one free promotions too). 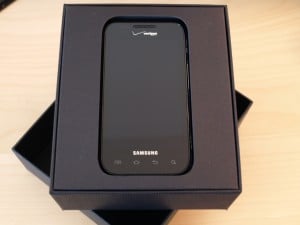 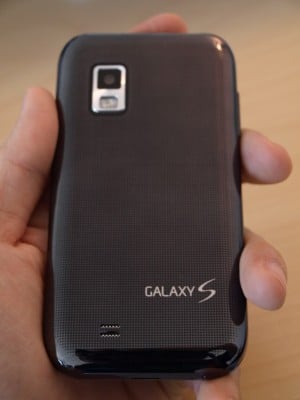 The Samsung Fascinate has an impressive set of features and it’s quite a slim and sexy device. The first thing to jump out at you is the gorgeous 4-inch Super AMOLED screen. The colors are vibrant, blacks are deep and photos, the web and videos are a joy to look at. Using the phone in direct sunlight isn’t a blast but that’s a minor quibble with a jaw-dropping display.

On the face, you also have four capacitive touch buttons and these work well enough. There are some delays for these buttons to register but I’m thinking that’s more to do with the buggy software (much, much more on that later).

Along the side, you have an unlock/power button and I’m still a little uncomfortable with this placement because I’m not used to it. The other spine has a volume rocker that works well and you have a standard headphone jack and microUSB port on top. What I love about this phone is that there’s a little sliding port to cover the microUSB port. It’s a very minor detail, but it bothers me when a phone like the myTouch 4G have exposed ports and don’t even get me started on a flimsy plastic covers.

The Samsung Fascinate has a 1 GHz Hummingbird processor and this should make things run like butter but it doesn’t and I believe it’s a software issue (again, more on that later). Still, it does pump out better GPU performance than similar devices and 3D games do look good on this.

This Android handset is quite slim and light and I love how easy it is to fit the Fascinate in your pocket. At 4.92 by 2.53 by .39 inches, it’s not going to give most people problems with the size and it’s quite light at 4.16 ounces. Some of you may need a little time adjusting to the 4-inch screen but, trust me, it’s well worth it.

Unfortunately, the Samsung Fascinate doesn’t quite have the feel of a top-tier device thanks to the cheap plasticky back cover. It kind of reminds me of the back cover of the Omnia II, as it has a similar finish and design. Oh, that’s not a good thing by the way.

The back cover pops off easily (and feels even cheaper once it’s off) to reveal the battery and swappable microSD slot. I don’t like that you have to pop off the cover to change memory cards but at least you don’t have to take out the battery.

Still, the big beautiful screen is all you really need to worry about and it is incredible, so I can cut the phone a little slack for the cheap back cover and for having to remove it to swap your memory cards. 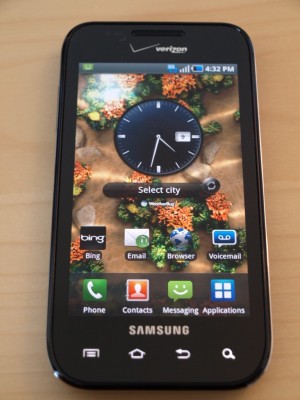 This is where the Samsung Fascinate falls flat on the face. The software on this device is buggy, slow and so reprehensible that it is a complete and utter deal breaker for me.

First of all, get used to your phone freezing a lot. There’s no real rhyme or reason for this as various types of apps will just hang and pause or outright crash. That shouldn’t happen on a phone with a strong 1 GHz processor and Android 2.1.

As for the core of the platform itself, it’s a relatively modern version of Android and you know what that means: strong messaging capabilities, it’s easy to make calls, send e-mail, browse the web and augment your phone with the growing Android Market. It’s not quite as stellar as Android 2.2 but Eclair will work well for most people.

Or, it would, if the Fascinate didn’t have so many maddening bugs. When I reviewed the Captivate, I said I kind of liked TouchWiz 3.0 because it adds some nice visual polish, as well as cool things like an app switcher in the notification bar.

I’m getting the feeling that Samsung hasn’t quite ironed out all the bugs in TouchWiz though, as IntoMobile’s Blake also said he has seen multiple bugs and crashes with the T-Mobile Vibrant. It’s quite a shame too, as I really wanted to like the Fascinate.

The bugs are everywhere too, as it will even interfere with your Swype typing and I’ve even found there to be consistent problems just plugging it in to your computer to mount it. As the kids would say, this is an epic fail.

Verizon has also dipped its fingers in the software pie, as this phone comes preloaded with Bing. I’m not actually against this type of preloaded software – business is business, after all – but I am perturbed that you can’t make Google or Yahoo the default.

Bing search is mostly fine but it’s not as seamlessly integrated in to the OS as Google’s search engine is. When you search the web with the integrated Bing and want to click on a link to the browser, you’re put in a browser within the app. That means there’s still the Bing search bar at the top of your browsing window – not a major deal but that extra real estate can add up.

Bing Maps is on there too and it’s solid but not quite as good as Google Maps – I use public transportation directions quite often and that can’t be found on Microsoft’s equivalent. Luckily, you can just download Google Maps or the Google search app if you prefer that.

Like other Android Verizon phones (Droid X), the Samsung Fascinate comes with the BlockBuster, NFL Mobile and a few other apps. I prefer Netflix to BlockBuster but the media-streaming app does work well if you have an account.

If you care at all about football, you need to check out the NFL Mobile app on Verizon. It gives you a ton of stats, videos, clips and the much-appreciated Red Zone channel on the go. It’s not enough to save this device but I do recommend checking it out on a Verizon phone.

There’s also a 3G mobile hotspot option for a monthly fee and it works as well as you would expect. Be prepared for your battery to life to go away if you use it though, but it is a good way to get some broadband connection on the go. 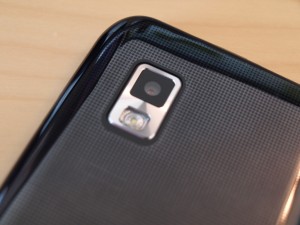 Like all the other Galaxy S smartphones, the Samsung Fascinate has a 5-megapixel camera with LED flash that can record in 720p HD. I came away impressed with the quality of the shots and the videos but software bugs kept creeping up again.

I do kind of miss a hard camera button but at least you can use the volume keys to zoom. The camera user interface works well and it gives you a variety of options including outdoor visibility mode (which helps), various scene positions, anti-shake technology, blink detection, effects, ISO adjustments and more. There are also a variety of shooting modes and I was impressed by the default ability to capture motion. I also found the pictures to come out sharp and crisp, with really nice colors.

The LED flash is pretty bright and works well enough in low-lighting settings. You’re still not going to get amazing shots with bad lighting but at least this one gives you a shot.

The problem is that there were lots and lots of bugs that sometimes made shooting a frustrating experience. The Samsung Fascinate would get stuck in the camera mode often and no amount of pressing back could get me out of it. This freezing also didn’t allow me to take some shots, which is a pain when that magic moment gets by you because of a freaking bug. 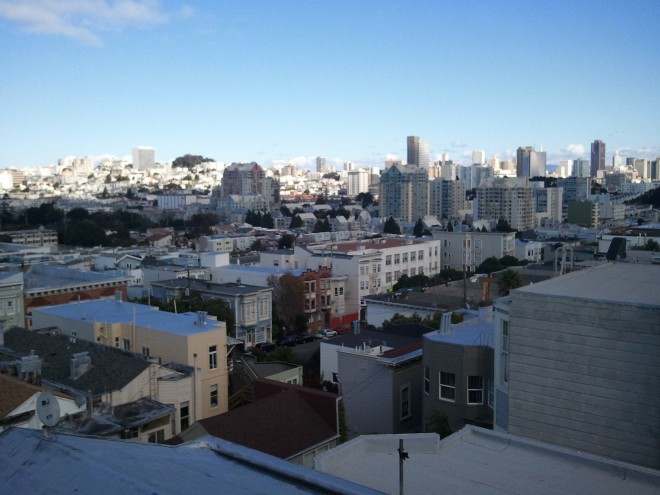 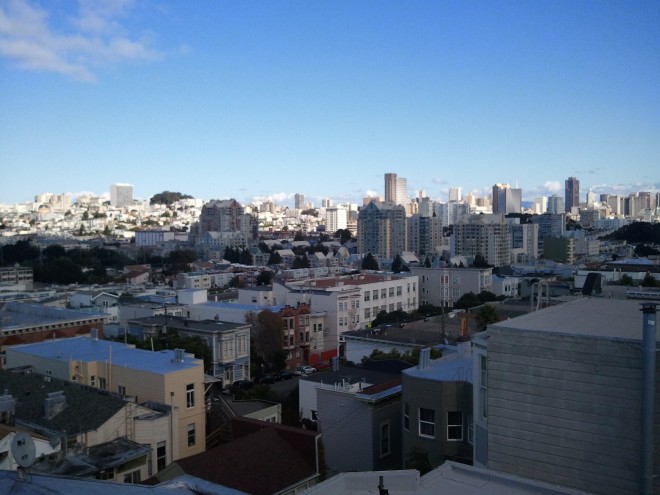 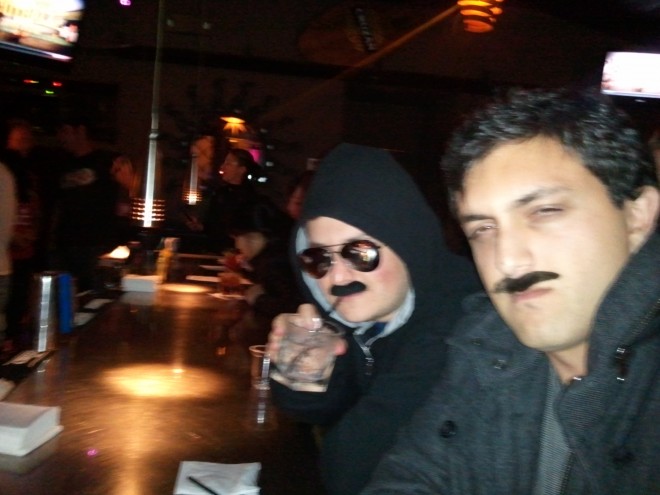 The video recording is also pretty nice, as the 720p HD video comes out looking like a champ. I don’t like that it’s not the default or that you have to hit the stop button to have it save the video to the device – just save everything, I’ll decide later – but it’s still rock solid.

This Verizon Android phone comes with your standard Webkit browser that can be found with the 2.1 version of the software and it handles most websites well. I miss the advanced JavaScript chops and Adobe Flash capabilities that can be found with Android 2.2 devices but most pages render well, there’s intelligent zooming and formatting and the kinetic scrolling is good. Good stuff here.

The multimedia is fairly bare bones, as it is for many Android devices. It handles most of the audio and videos you want and it looks slightly better than the stock layer.

Curiously, I couldn’t find the Samsung Media Hub for the Fascinate, although it can be found on other Galaxy S devices. It would have been nice to check out this content delivery service but maybe that’s coming with the Froyo update. Overall, the device gets a passing grade for multimedia but there’s nothing that will knock your socks off. 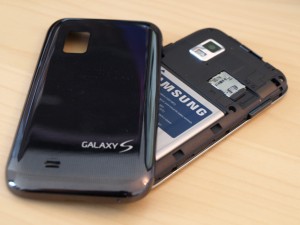 The call quality on the Verizon Fascinate was excellent, even when using Google Voice to route all calls. Callers sounded clear, just the right volume and there wasn’t any hissing or static that can sometimes plague cell phones.

Most smartphones will get you until about 8 p.m. on a single charge and with moderate usage and the Fascinate is no different. It should last you most of the day unless you’re streaming tunes all day or using the mobile hotspot option. Remember to charge it every night and you should be fine.

The Final Take: So pretty, yet so bad

The Fascinate is highly capable Android device with a big, beautiful screen that I just wanted to love but the infestation of software bugs just made using this Verizon smartphone a pain in the you know what. It does get points for having a sharp camera and, of course, a lust-worthy screen.

I know Verizon is offering this phone with very strong promotions like buy one, get one deals, but please resist until Samsung and Verizon get its act together and get an update out there that makes the software as good as that stunning display. I’d highly recommend a Droid X instead if you’re looking for an Android smartphone on Verizon.

We've seen the T-Mobile G2 overclocked before, but nowhere near the speeds that this new overclocked Android kernel provides. A...