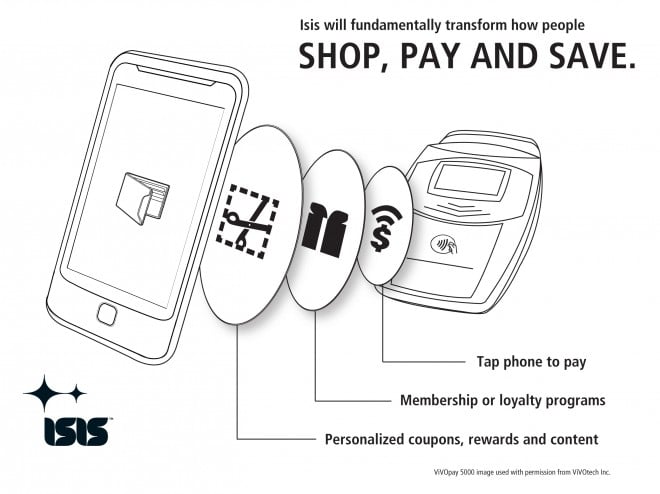 You may have heard that AT&T, T-Mobile, Verizon, Discover and Barclay’s have formed a joint-venture called Isis to boost mobile payments through NFC technology but what does that really mean for you? Well, friends, we spoke with Isis today about how it could be different this time and about how your phone may finally become your wallet.

I spoke with Isis spokesperson Ryan Hughes, a Verizon veteran, and he explained that this isn’t just a mobile payment system, as Isis is trying to develop a new mobile commerce platform. That does mean you’ll be able to use these phones to tap-to-pay with NFC but it will also includes a suite of features like digital coupons and virtual loyalty programs.

“It’s important you know that we’re open,” Hughes said. “We’re open for business, open for partnership with banks, merchants and wireless carriers, and we’re open on collaborating on the technology side.”

Without denigrating the technical stuff, Hughes said the hardware side of the equation is pretty easy. NFC has been around for a while and the standards and specifications are well known. Android, the world’s second-largest smartphone operating system, will soon bake in NFC support with its Gingerbread release and it could just be a matter of time before all the major players do too.

NFC hardware adoption has always been an issue in the past because it requires users replacing their phones for devices with the capable technology. Isis said the three carriers will eventually make sure its entire lineup of phones are NFC-enabled and when you factor in that the average user upgrades their phone every 18 months, there could be more than 200 million NFC-enabled devices in the United States in the next 5 years or so.

Isis said the payment process will work though apps: you’d walk into a store with a capable device, open up the app, swipe the phone near a capable NFC terminal and your purchase would be complete with a digital receipt. We know this process works, as we’ve seen it successfully implemented with startups like Bling Nation.

“The payment space has suffered from a lack of innovation,” Hughes said.

When purchasing an NFC-enabled phone, users will be able to sign up for a credit, debit or prepaid payment functionality. It’s not the carrier tu

The Isis service will be utilizing Discover’s existing network of merchants and its Zip wireless payment technology. It’s still too early to tell how quickly merchants will hop on the bandwagon – it may cost a lot of money to get the new equipment, particularly if you’re a large retailer with multiple locations – but this may be the best shot the United States has at widespread mobile wallet functionality.

It's been a long time coming, but you can now get the official Google Voice app for the Apple iPhone....