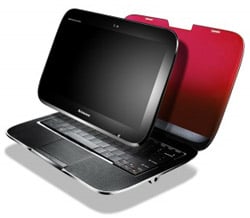 Lenovo wants a piece of the tablet market, too. Apple’s iPad may be leading the market at the moment, but Samsung will definitely get its share of the action with its great Galaxy Tab offering.

The main market for such products are the U.S. and Western Europe, and Lenovo plans to “attack” the former with its LePad tablet at some point next year (though we’re they’ll hit Western Europe soon after). We don’t know all the details, but I’m sure we’ll see something more concrete unveiled at the upcoming CES in Las Vegas. In that sense, we’re not only hoping for their tablet, but also for their Android-powered smartphone(s) like that cool-lookin’ LePhone.

And maybe tablet won’t be the whole story. Maybe Lenovo finally launches its dual-mode tablet/laptop computer — the IdeaPad U1 Hybrid. Hopefully, its “Linux part” will run Android, providing users with access to tons of apps… We’re definitely looking forward to CES, have no doubts about it. 😉

Sharp doesn't want to miss India's "rise to mobility" and is launching four new phones in the fast developing nation....