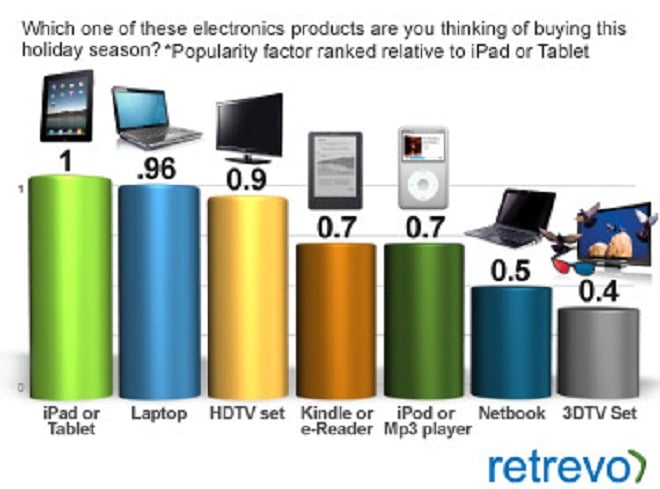 It could be a big holiday season for the Apple iPad, as a new consumer study from Retrevo said this tablet is the top item on many electronic-seeking holiday buyers.

According to Retrevo, “When the study asked what was on consumers’ wish lists this year the product on the top of most people’s electronics wish lists was a tablet followed closely by a laptop, HDTV set, and smartphone. Netbooks and 3D TVs were lowest on the lists.”

Of course, the survey asked about the Apple iPad or a tablet but I wouldn’t hold out too much hope for Android-powered devices like the Galaxy Tab because I’m still convinced that the general public thinks a tablet is an iPad.

This idea is kind of backed up by recent Gartner numbers, which expects tablets to sell 19.5 million units this year with the Apple iPad accounting for more than 90% of that. This should be spurred along with a massive Apple iPad marketing blitz and the fact that this device is now available in various locations like Wal-Mart and Verizon stores.

The Samsung Galaxy Tab may be hamstrung by the fact that some of its carrier versions come with long-term data contracts. While some of these data plans are reasonable, it does seem like a bit much to have another data plan tied to a device that will likely not be relevant by the end of the contract.

Look for the tablet market to really take off next year, as we get a slew of new products from the likes of Research In Motion, LG, Motorola and others. The majority of these will use Android but we’re still holding out hope that the PalmPad with webOS will come out at a good price with solid hardware.

Are you planning on buying a tablet this holiday season?

Really, these are just fingerless gloves, but the folks at FredFlare.com won't have any of it. Dubbed (and being sold...