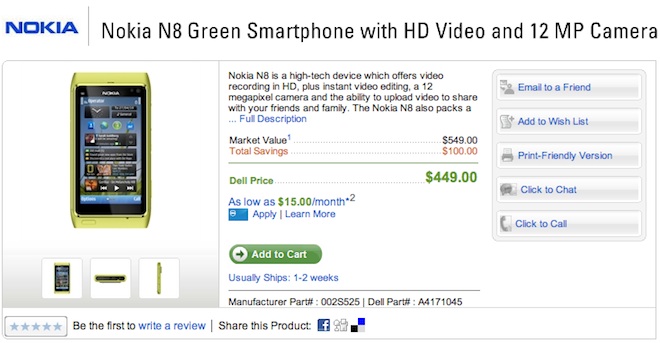 Nokia’s N8, regardless of what you think about the Symbian^3 operating system, is hands down the best camera phone money can buy. With a 12 megapixel sensor that’s larger than many of the sensors found in today’s point and shoot cameras, plus the ability to capture 720p video, if you’re an avid mobile photographer then this is one hell of a deal. Other good things about the N8: quadband GSM/EDGE so it’ll be able to make phone calls and send texts from anywhere in the world, and pentaband 3G, meaning you’ll get high speed internet access no matter which weird frequency an operator is using.

We compared the Nokia N8 to the Apple iPhone 4 and found that not only does the N8 produce better images with colors that are more natural and truer to the subject matter we were capturing, but they were also sharper, and the night shots were incredibly impressive thanks to the Xenon flash.

Still, this is the N8 we’re talking about, so you’re going to have to install quite a bit of software after booting it up to get it working right. First thing you should do is load up Opera Mobile 10.1 Beta, because the built in browser is far from adequate. Next you’ll want to grab JoikuSpot so you can turn your N8 into a wireless hotspot that your Apple iPad/iPod or Amazon Kindle can connect to the internet. Last but not least, Swype, because the built in text entry on the N8 is down right terrible. Nokia themselves say they’re going to address the issue in early 2011, and we hope they’re not joking when they say that because typing a text message on the N8 is an exercise of patience and maintaining mental sanity.

Green may not be your favorite color, but you’ll be unique in a sea of black/white/gray devices. For what it’s worth: If I was in the USA, I’d totally pick this puppy up.

[Direct link to the N8 product page on Dell]

In a perfect world there would be no need to code the same application to run on multiple platforms. Developers...