We’ve known about the HTC Merge for a quite a while now, but we never really knew when the handset would actually launch. As it turns out, it may launch as soon as tomorrow as apart of the Droid Incredible‘s re-launch party. The evidence is piling up for the impending Merge launch, and it could only be right around the corner. 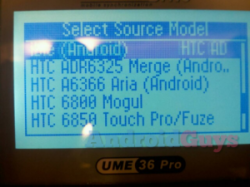 Just recently, a Cellebrite machine gave us a morsel of hope concerning the Merge. The Merge popped up in the list of supported handsets, essentially confirming a near-term launch. There had been rumors that the Merge had been delayed so it could be outfitted with LTE support, but that no longer seems to be the case, as it may make its official debut tomorrow at the Droid Incredible Cabaret party.

Sure, we’ve already seen a hands-on review of the device already, but the real question that lingers is when it will become available. Unless the Droid Incredible relaunch is the Incredible HD, Verizon may need to announce another handset tomorrow to keep things interesting.

So if you’re in the market for a keyboard toting Android phone for Verizon, and aren’t sold on the Droid 2, (and lets hope you’re not sold on the Ally or Devour) you may want to wait it out a bit for the Merge. It will be one of the few Android handsets with HTC Sense and a QWERTY slider in tow, making it pretty unique, as simple as it may seem. We do know that the Merge will be a world-capable phone, but other than that it seems to be a pretty standard/ordinary smartphone by today’s standards. We’re not saying that it will be a bad handset by any means, but it’s just on par with devices that are already available in the market.

Let’s hope we get to see this thing announced tomorrow, and we’ll be here keeping you up to date as soon as we hear any more information on this handset.

Flyer for the Droid Incredible Cabaret party below: 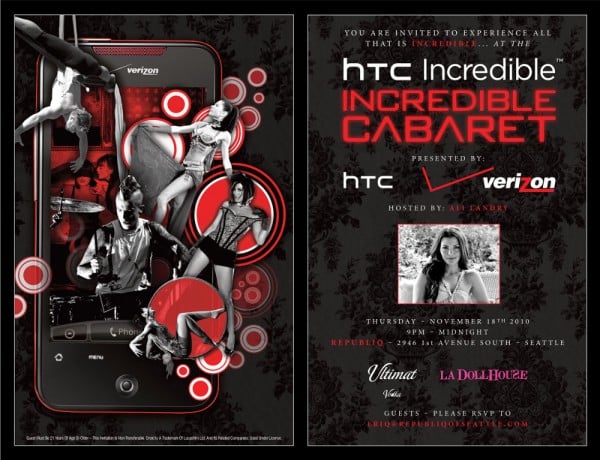