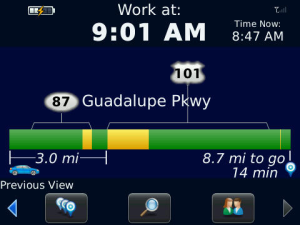 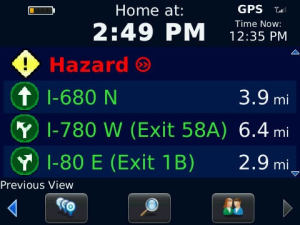 The BlackBerry Traffic application that has been chilling out in a closed beta format for the last couple of months is now done testing and available to the public at large for free.

For those unfamiliar, it’s is a turn-by-turn directions app made by RIM that instead of showing a map, would display a simple straight line with estimates about how busy each section of the trip would be. This ties in with a new API that RIM launched with OS 6 that would mine anonymous location data and feed it to developers.

Even though you can opt out of that service, I still find it’s on shaky privacy ground for those who are concerned about that sort of thing. Still, BlackBerry Traffic is a neat take on the traditional navigation app, and by crowdsourcing GPS data, BlackBerry developers can throw an estimated time of arrival for any location within their app.

If you already know where you’re driving and just want to know what traffic is like, you can download BlackBerry Traffic in App World.

Google recently sent out a notification about the Android Market getting some changes, and they have arrived in a big...