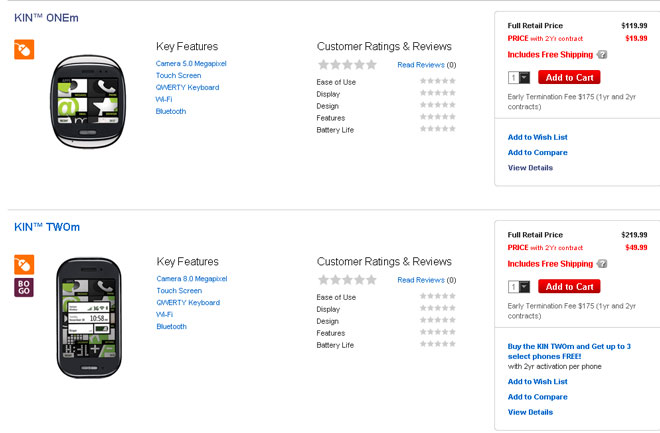 As rumored, the Kin One and Two have found their way back to Verizon, only they might not be quite what you remember. The feature lists for what Verizon’s calling the ONEm and TWOm show Zune compatibility, but the automatic, over-the-air backup service called Studio is nowhere to be mentioned. No doubt the Microsoft team that was in charge of maintaining it buggered off to work on Windows Phone after the Kin One and Two were axed the first go-around, but maybe it’s still running – any Kin owners able to confirm?

Although not technically a Windows 7 phone, the Kin series was an interim stage after Windows Mobile 6.5 and before the likes of the Focus, Surround, and others were released. The Kin One has a square-ish form factor with a slide-out keyboard, and packs a 5 megapixel camera with flash, 320 x 240 touchscreen, 3G, GPS, Wi-Fi, . The Kin Two is mostly the same, only it has a a bigger 3.4-inch screen, landscape-oriented slide-out keyboard, and a better 8 megapixel camera capable of HD video recording.

It’s a little weird seeing the Kin back on sale – it felt like we had all made our peace with the project dying off, but I guess there’s still plenty of stock left to offload. They may be more accessible now that you aren’t required to have a $30 data package on top of your standard voice plan to get one, at least. Kin Studio was their main selling point though, and if it didn’t make the cut without the high-end data plan to support it, the only reason to really get either one is their looks.

Feeling like giving Kin a go? You get get the ONEm in Verizon’s online store for $19.99 on a two-year contract, or the Kin TWOm for $49.99 with the added bonus of a BOGO deal. Take a look at our review of the original to see how the One runs.

Here's one for those of you who want to join the Windows Phone 7 game. Amazon is offering the Samsung...