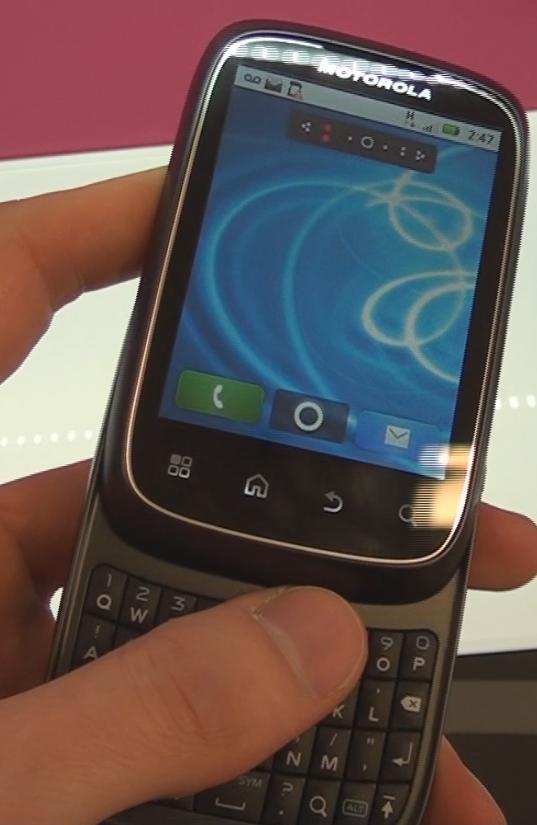 Mobilicity announced that the Motorola Spice would be coming out in Canada yesterday, and just in time for opening up their new markets (like here in Ottawa) tomorrow, they gave us a bit of a sneak peek. For $200 without contract, the Motorola Spice offers a 3″ QVGA touchscreen, 3 megapixel camera, Android 2.1, and a portrait-sliding QWERTY keyboard. It also has another one of those funny little trackpads on the back that you can use a cursor with, but it’s really small, even compared to the other Motorola handsets out there, that I would be hard-pressed to think of a situation where I would want to use it. It runs on AWS bands like T-Mobile, so you might see it in the U.S. at some point, but we haven’t heard anything yet.

As an entry-level Android handset, I really liked the Spice. The keyboard was a hell of a lot more ergonomic than the Flipout or Charm, has some style and pocketability with the sliding form factor, and the up-to-date software meant most apps should run fine. The only real competitor at this operating system and service tier is Wind’s Huawei U8100, and in my experience, the touchscreen on that thing is really horrible.

Potentially the sweetest thing about the Spice are the plans that Mobilicity is offering to go along with it. There are no contracts, and you get unlimited texting and local calling starting at $25/month. Unlimited data is an entirely-reasonable $10 add-on. The only caveat I would worry about is the quality of their network, but even then, it’ll be so under-burdened compared to any of the Big Three, that I imagine it works out to equivalent reliability.

You may also notice the Sony Ericsson X10 on the side there – Mobilicity will also be offering it soon for $499 off-contract, and that includes the recent Android 2.1 update. So much for your exclusive on that one, Rogers. Mobilicity is also launching the LG Wink, which is a super-simple sliding feature phone. Wind might have been first to the party being all “revolutionary” with Canadian wireless, but considering the high-grade handsets that Mobilicity is bringing to the table (like the Nexus One), they’ll certainly have a run for their money.

As far as a release date is concerned, the Motorola Spice should be in Mobilicity stores within the next couple of days. For the time being, enjoy the hands-on video below!

The HTC Merge decided to show itself off briefly on Verizon's website earlier today, but the keyboard-toting Android phone was...