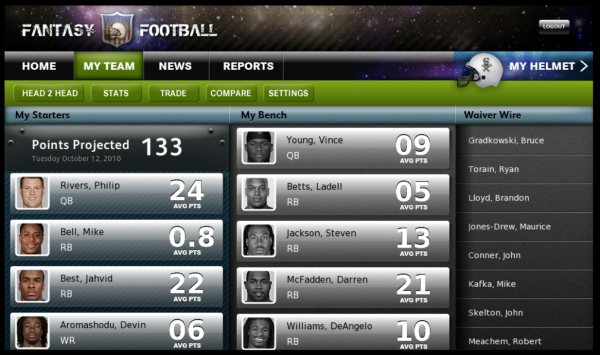 Developers have had some time to play with RIM’s software development kit for the BlackBerry PlayBook tablet, and one, Universal Mind, is showing off what they’ve done so far with their fantasy football app. There’s a video below to see it in action in the simulator, and presuming that the device itself performs just as well, I think we can look forward to a healthy selection of awesome apps. RIM is dangling a free PlayBook in front of developers who are willing to submit something to App World before launch, so that should help build up an initial selection.

As far as the actual development process goes, the programmer says that the Flash Builder used is “very familiar”, and working with the simulator is “quick and easy”. They didn’t have any problems reusing a lot of code, and simple aesthetic stuff like elasticity in scrollbars is built right in. There should be a native SDK at some point, as well as some Java tools to bring old BlackBerry smartphone apps to the tablet, but we haven’t heard anything about that just yet.

Anyway, here’s the video of the fantasy football app in action on a simulated PlayBook. If you’d like to see the real thing, take a look at this browser comparison with the iPad or a run-through of the basic OS from Adobe MAX.

I don't know about you, but I've been excited about RAGE HD ever since id Software debuted it this past...