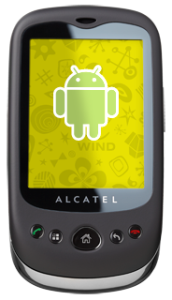 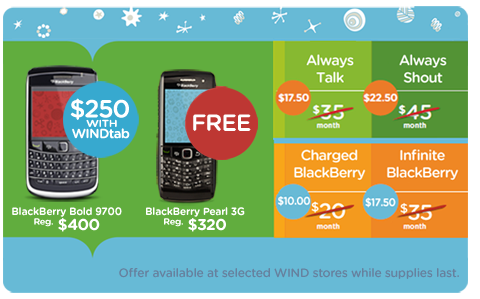 Wind Mobile is gearing up for the holidays with their second Android device, the Alcatel Tribe OT-981. It runs 2.1, has a 2 megapixel camera, 2.8-inch QVGA touchscreen, Wi-Fi, GPS, and 3G. It’s a portrait-slider with a full QWERTY keyboard not unlike the Motorola Spice that Mobilicity launched yesterday.

On top of that, Wind Mobile also announced a promotion where you get a free BlackBerry Pearl 3G 9100 if you buy a BlackBerry Bold 9700 and activate both. The folds in nicely with a half-off promo they have going on current plans, and the recent launch of their tab option, where you can pay off up to $150 of the device cost just by being a loyal customer.

Wind Mobile is approaching their one-year anniversary, and I’m really curious to hear about how well they’ve done. The latest tally puts their subscriber base at 140,000, which, though paltry compared to the 211,000 net additions that Rogers made in Q3 alone, is a decent start for a carrier who’s building something from scratch.

You can find the Alcatel Tribe in the Wind Mobile store for $190. Personally, I’d rather go with the Motorola Spice.

Mobile head Ron Garriques to leave his position at Dell

A recent SEC filing by Dell revealed the unexpected information that the head of Dell's mobile communications group, Ron Garriques, is...