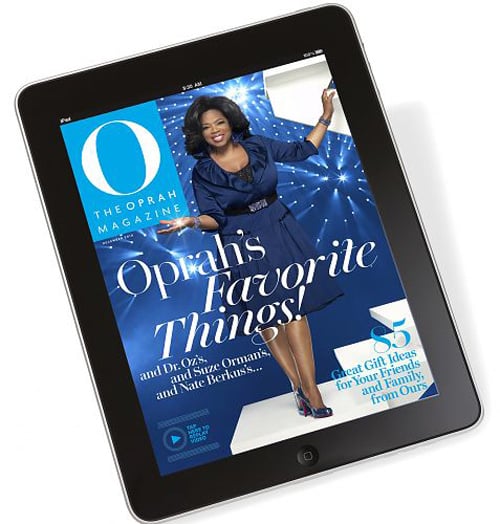 Last week we heard about Oprah’s new iPad app and didn’t think too much of it. Just another publication moving into the future and getting an iPad app. No biggie. But we didn’t think that the Apple tablet would be topping Oprah’s “Favorite Things” list, which is historically a pretty good list to get on if you’re looking to push your product and get some good recognition. You know how Oprah rolls: her word is gold and when she says she likes a new book or gadget, folks go gobbling it up!

After announcing that it was her “number one favorite thing ever,” Oprah did her Oprah thing and gave free iPads out to the audience, expressing utter joy at the experience of the thing. Also on the list was a five-year subscription to Netflix, a Sony 3D TV and Blu-ray player, Groupon’s partnership with Kiva and Microsoft Bing. But when it comes to being number one for Oprah, the iPad beats them all.

The Apple tablet has really been quite a revolutionary device regardless of how you may feel about it. It seems that most folks are split right down the middle – they either love it or hate it. But there was a time when critics said there was no market for a tablet PC and Apple proved them wrong by selling millions of iPads and spawning so many copy-cats. It has been very evident that other tablets have been rushed to market due to the raging popularity of the iPad.

Now that Black Friday is on its way in and the holidays will be here before we know it, this support from Oprah could help Apple see another big surge in iPad sales.

What do you think? Have you been wanting an iPad but found yourself torn between it and another tablet PC? Or perhaps given your holiday budget, you didn’t know whether you should pick one up over a TV or video game console? Will Oprah’s endorsement help you decide?

For many people, this is the season for shopping until you drop and eBay is trying to help you survive...