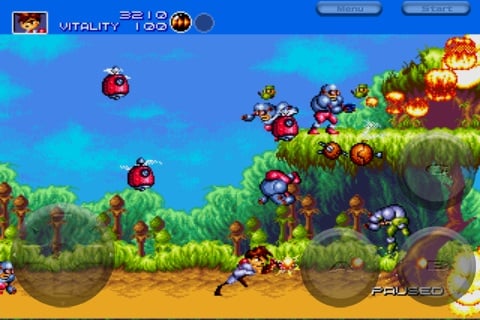 Gunstar Heroes was one of the best side-scrolling shooters on the SEGA Geneis when it was released in 1993. The game follows the story of Gunstar twins Red and Blue as they fight Colonel Red and the Emperor who are bent on bringing the robot “Golden Silver” back to life to destroy the world. Don’t you hate when that happens?

At the beginning of the game, you can choose from four different weapons that can be combined to produce fourteen unique weapons. One of the main highlights of Gunstar Heroes was its high-quality 16-bit graphics, especially the large boss battles which were made up of multiple sprites. Gunstar Heroes also allowed for 2-player co-op, which can be achieved in the iPhone version as the game supports multiplayer over Bluetooth. So if you’ve got a buddy with an iPhone or are lucky enough to own two iDevices, then pick up Gunstar Heroes and take on Colonel Red and the Emperor together!

Back in October, we caught a glimpse of President Obama signing an iPad. He did so at a rally in...