Nokia has been pumping out Symbian^3 devices at quite an impressive rate. First there was the N8, which was announced far too early before finally shipping, then there was the C7, and more recently the C6-01 and E7. All of these devices have one thing in common: they’re running the most up to date version of the most popular smarpthone platform by volume. Now I said volume, because many users have issues with Symbian^3 and wish Nokia would just give up already and slap Google’s Android OS on their hardware. That’s never going to happen because Nokia is trying to get into the service game, and what better way to screw up your chances of creating successful services by bundling applications developed by your competitor. That’s a whole other issue that we’ll tackle another day. For now let’s get on to the X7-00.

From the video above it doesn’t look very interesting. The design is squared off, almost as if it were ripped right out of the upcoming Tron film. Laying next to the E7 [photo below] it looks to be the exact same size, meaning it has a 4 inch screen. It runs Symbian^3, but unlike other devices with that OS, there are 4 homescreens on the X7-00, not 3, making us wonder to ourselves what else Nokia tweaked on this puppy. 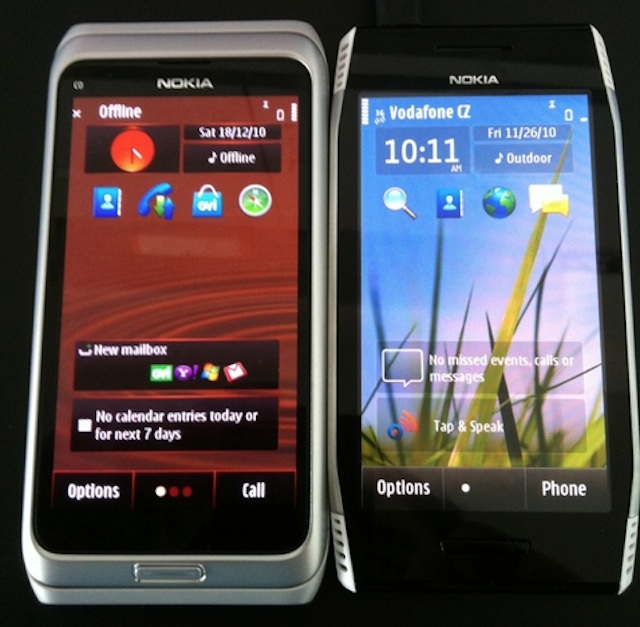 The battery is reportedly locked in place, like the Nokia N8, which was the first device Nokia shipped with a non user replaceable battery. That’s a shame. There are also four speakers, one on each corner of the device, that are reportedly “very loud”. We don’t know when this thing is going to get announced, nor when it’s going to ship, or how much it’s going to cost. That being said, are we interested? Not really.

Update: The video has been made private, sorry folks. Enjoy the images above from Slash Gear.

Update: And we found a mirror for the video!

Nokia's age old and highly popular 5800 model was the first device to come out of the Finnish firm running...