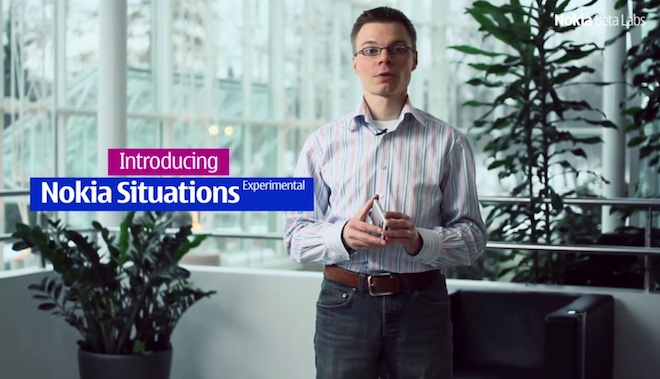 Nokia’s Beta Labs has released an intriguing new program called “Situations” that bills itself as a semi artificial intelligent way of managing your mobile phone based around multiple variables such as the time of day and your present location. Say for instance that you and your girlfriend always see a movie every Wednesday night at roughly the same time. You can now setup a rule so that during those particular hours your mobile doesn’t ring and an automatic text message is sent to people alerting them to your date in case they call you while you’re in the cinema. What about stepping into the office, wouldn’t you want your smartphone to automatically pull up IntoMobile as you’re walking to your desk so that when you take your handset out of your pocket you can just start reading? Situations can make that happen.

While all of this sounds cool, it’s going to take some effort on your part to set it up. None of this is automated, so unlike Arnold Schwarzenegger, who in Termintor 2 said he has a learning computer somewhere in his ass kicking skull, you have to program each and every situation you think you’re going to encounter. That’s immediately going to turn off new users, but hey, since this is a Beta Labs project you never know if it’s going to end up in the second or third version of the application.

Speaking about the application, it’s available for not only Nokia’s latest Symbian^3 devices, but also for devices that go as far back as the Symbian powered S60 3rd Edition Feature 2 platform. It’s very early days, and the potential is strong, especially if this application starts learning your behavior based around who you’re around. Don’t be surprised if your phone will one day setup your address book and points of interest database based solely on who you’re with and where you are.

Earlier this month, after Nokia declared that they would swallow the Symbian Foundation back into their internal organization, we knew...