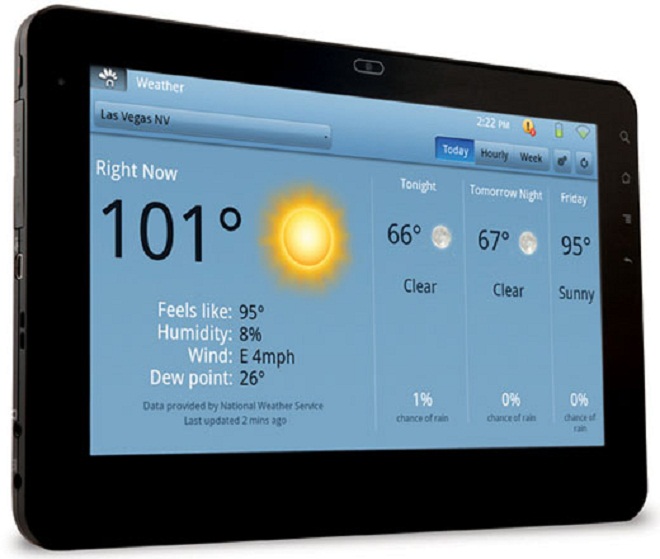 Where should you go for a high-end tablet? No, you shouldn’t go to TJ Maxx, you should head over to Office Depot to pick up the ViewSonic G tablet because this Android-powered device looks pretty powerful.

How powerful? Well, the ViewSonic G Android tablet is powered by the Tegra 2 processor, which has performed quite admirably on Android benchmarks. This should just be the first tablet to utilize Tegra 2, as we’re expecting a slew of devices to emerge next year.

Like the Apple iPad, the ViewSonic G tablet will feature a 10-inch screen. You can look for 1080p HD video playback and 1024 x 600 resolution.

You can also look forward to a front-facing camera for video calls, Bluetooth and WiFi (including 802.11n), a microSD slot and USB connectivity. There should also be 16 GB of onboard storage and 512 Mb of RAM.

The ViewSonic G tablet will be powered by Android 2.2, or Froyo. While Google has said this isn’t optimized for tablets, we’ve found it to be very solid on devices like the Samsung Galaxy Tab.

Some of you may be hesitant to buy a computing device from ViewSonic, which is mostly known for high-quality monitors. We’ve had a chance to check out the company’s other tablets and we came away impressed with the build quality and overall polish of the device.

One of the best things about the ViewSonic G tablet is that is should cost $399 from Office Depot and the online stores. That’s about $100 cheaper than the Apple iPad (unless you’re able to snag it from TJ Maxx) and it should also be cheaper than the WiFi-only version of the Galaxy Tab, which should hit Best Buy early next year.

As tempting as this device is, I’d still advise most people to wait a few months before diving into this market. After CES in January, we should know more about the competitive landscape.

Although Acer has totally been under the radar in the U.S. in terms of smartphones, the company is hoping to...