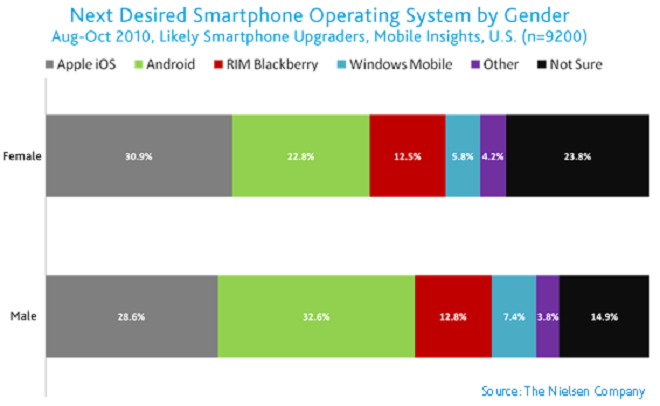 To be fair, it’s not by much. The study found 30.9% of females have the iPhone as their next desired device, compared to 28.6% of men. More than 32% of men are eying Android compared to 22.8% for females. I’m sure there are plenty of logical reasons for this but you can’t help but smirk at how this fits into the stereotypes.

Overall though, the Apple iPhone is slightly ahead of its peers when it comes to customers’ desires. According to Nielsen:

Among users planning to get a new smartphone, current smartphone owners showed a preference for the Apple iPhone (35 percent), while 28 percent of both smartphone and featurephone planned smartphone upgraders indicated they wanted a device with an Android operating system as their next mobile phone.

Taking another step back, Nielsen said that feature phones still account for 70.3% of the U.S. market, as of October 2010. Of the smartphone market, the Apple iPhone has 27.9% market share, Android has 22.7%, Research In Motion’s BlackBerry has 27.4% and then we find the Microsofts, Symbians and Palms of the world.

Smartphone ownership is expected to explode over the next few years and Android and the iPhone are expected to be the biggest beneficiaries. While the iPhone may eventually lose market share to competitors, you can be sure that Apple will still rake in the profits.

Google’s Android is still flying high and 2011 shouldn’t slow the momentum one bit. We can look forward to multiple killer devices from Motorola, Samsung and even LG. We can also look forward to a plethora of tablets with the little, green robot over the next few months.