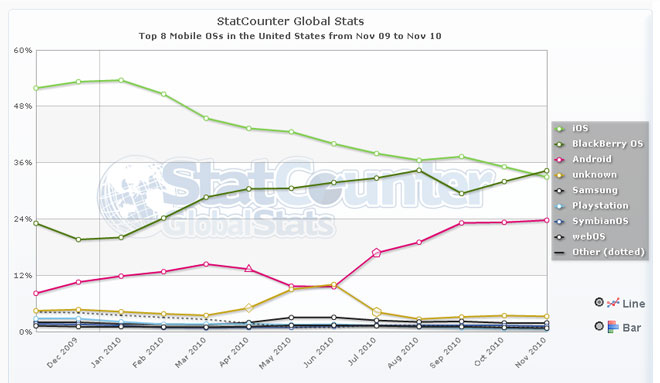 While we were looking at the numbers that Pingdom had commissioned from StatCounter regarding global smartphone OS marketshare based on web usage by region, we noticed that StatCounter also had some more recent mobile web usage data that showed BlackBerry being more popular than iOS (which includes iPhone, iPad, and iPod Touch) in the U.S. The release of OS 6 devices, like the Torch, Style, and Bold 9780 with a new WebKit browser may have helped RIM out.

Specifically, BlackBerry claimed 34.3% of the 15 billion page views StatsCounter was monitoring, while iOS clocked in at only 33%, down significantly from 51.9% at the same time last year. Android has seen a predictably meteoric rise, going from 8.2% share last year to 23.8% this year. Although there’s probably some correlation between how much internet these devices are devouring and how many of them are out there, it shouldn’t be taken as a direct translation; iPhone’s sales were ahead of RIM’s in the U.S. in Q3, as His Steveness is quick to point out, but these web usage figures may signal a reversal in Q4.

The thing that I’m most curious about this data is how it’s being collected. If they’re measuring web traffic in sheer megabytes, I reckon that due to RIM’s infrastructure for compressing wireless data, they’re leading iPhone even more than this graph is letting on. If it’s only page hits, it would be kind of understandable since folks on iPhones get a lot of their web content through apps instead. Android’s growth is to be expected, given the number of manufacturers pushing the OS, but there’s still some catching up to do, apparently.