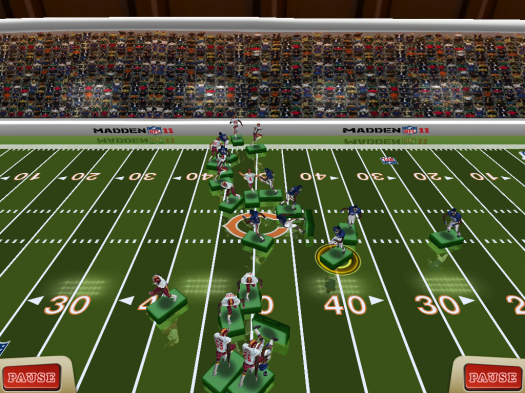 For those of you running Madden NFL 11 for iPad, an update you’ve no doubt been waiting for has arrived. That’s right, the ‘Vintage Voltage Football’ mode has been added to the app, and quite honestly, it’s a little bit of awesome.

When in the new game mode (which is an iPad exclusive by the way), the players on the field look like figurines (see screenshot above). It’s meant to remind you and play like those old electric football games. You know the ones, right? Well if you had one, and want to experience the same thing with a 2010 technological twist, you may want to grab the update.

The other notable enhancement in the update is new head-to-head gameplay. The new feature allows you to compete locally with your buddies via WiFi or Bluetooth.

With the NFL season really starting to heat up, the timing of the update couldn’t be better. New features, new game modes, and new ways to enjoy the first-ever Madden title for iPad. For all the details simply pop open the App Store on your iPad and look in the updates tab (if you’ve already installed). Alternatively, hit up the iTunes link below for all the details.

A recent ChangeWave survey suggests the Apple iPad is gaining ground on the Amazon Kindle. Long the leader in the...