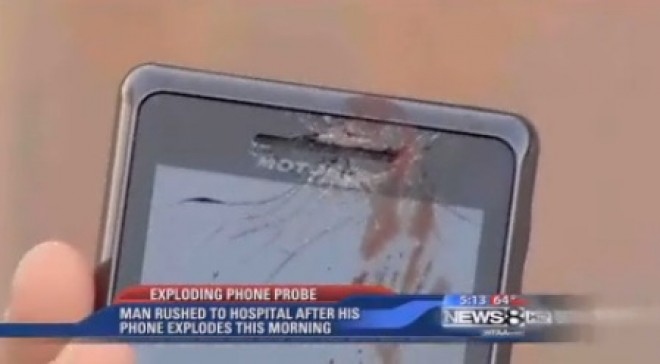 The Droid 2 may be all the Android-powered smartphone you need these days. It’s packed with a speedy processor, the latest version of Android OS, and smartphone features to keep you busy for months to come. Today, we’re seeing that Motorola has apparently endowed the phone with the ability to self-destruct. As in self-destructing by exploding. Of course, this isn’t a real feature, but that didn’t stop one man’s Droid 2 from exploding while he was taking a call. The handset exploded on his face, injuring him.

Aron Embry, a man from north Texas, was on the phone when he heard a loud pop, only to realize his ear was bleeding. He was taken to the hospital and was given stitches, but was unaware as to what had happened.

Once I got to the mirror and saw it, it was only then I kind of looked at my phone and realized that the screen had appeared to burst outward.

The Droid 2 apparently exploded near the ear speaker, and was the cause of Embry’s injuries. Luckily though, Embry did not have any hearing damage after the incident, but I’m sure he has some choice words for Motorola right now. Embry had purchased his brand new Droid 2 only two days prior. Maybe he should have gotten an EVO? Nonetheless, Motorola isn’t taking this lightly, either, and gave the following statement,

Motorola’s priority is, and always has been the safety of our customers, and all Motorola products are designed, manufactured and tested to meet or exceed international and local standards for consumer safety. We will reach out to the consumer and investigate this thoroughly.

We’ve heard stories of iPhone overheating and burning users, and we’ve seen phones that have actually caused a user’s death, so this sort of exploding mobile phone story shouldn’t be taken lightly. Whatever comes from this, Mr. Embry will likely have a good chunk of lawsuit settlement-money coming to him at some point. And, we imagine he’ll be investing in a good Bluetooth headset very soon.

Anyone with a Droid 2 planning to start using speaker phone a little more often now?

Check out the video below

A new report from comScore confirms what a lot of us already knew: the Google Android operating system is the...