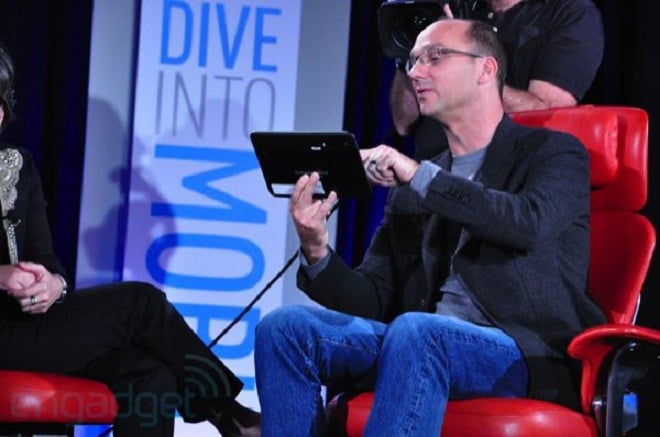 Well, Google seems to be making a habit of going to conferences and showing off unreleased hardware and software. A few weeks after CEO Eric Schmidt showed off the Nexus S, the company’s Android chief Andy Rubin showed off an upcoming Motorola Android tablet with a dual-core processor and Android 3.0 Honeycomb.

Engadget nabbed a few pictures of Rubin showing off the unnamed Motorola tablet at the D: Dive conference in San Francisco Monday and there aren’t many details but this looks like the rumored Stingray tablet we’ve heard about.

Rubin did say it uses a “dual-core 3D processor” and I’d bet dollars to doughnuts that this is the Tegra 2 chip we’ve been pining for. This is supposed to provide stellar benchmarks and conserve power thanks to the multiple cores.

If you thought the just-released Android 2.3 Gingerbread was state of the art, you’re already a bit in the past, as this Motorola tablet will be running the 3.0 Honeycomb version. Not much is known about his version of the little, green robot except that it will be optimized for tablets.

Rubin didn’t dive into the specs of the Motorola Android tablet but the Engadget folks suspect that this may be a full 10-inch screen (or 9.7 inches), so it could match the Apple iPad in the real estate department. I like the 7-inch screen on the Galaxy Tab but I do sometimes miss the extra screen space.

This Motorola Android tablet will have video-chatting capabilities, which was one of the big baked-in features of Gingerbread. It will have to have this feature, as the iPad 2 is virtually guaranteed to have FaceTime calling.

There was no word on when this would be released (Honeycomb is slated for “next year,”) but I wouldn’t be surprised to see this land as a Verizon device with FiOS access. If this had 4G LTE access I would probably buy it sight unseen, no matter the price.

How does a “DroidPad” sound to you?