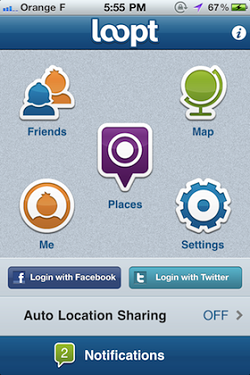 When it comes to check-in services, Foursquare and Facebook Places generally get more attention than Loopt, which was pioneering location-based social networking before it was trendy. Well, Loopt has just released its 4.0 version of its app for Apple iPhone and Android and the LBS apps features a revamped user interface and some cool geo-related features.

The first thing that jumps out at you is the refined user interface, which makes it easier to find your friends around you as well as simplifies checking in. We know the app can already check-in in the background and the UI makes that much spiffier.

The new app also has deeper integration with Faceboo, as you can now send location-based messages, or Pings, to your Facebook friends’ walls. This lets the world’s largest social network do the heavy lifting on the friend side and lets Loopt focus on its expertise of LBS.

Those Pings have also been improved (don’t confuse it with Apple’s Ping social network), as these messages now have geo-information to convey your location in a simpler way. The company is also pushing its Rewards network for checking in and that could lead to deals and coupons depending on where you’re sharing your location.

“Loopt offers a location-first view of the world, shining a spotlight on friends and places around you, whether they’re on Loopt or Facebook,” said Sam Altman, co-founder and CEO, in a prepared statement. “When our users open Loopt, they see the world in a more relevant way. We continue to work at surfacing interesting information that makes Loopt like x-ray vision, where you can see through city walls and find something compelling, whether it’s being alerted that an old friend is nearby, or that there’s a café around the corner frequented by friends.”

You can download the Apple iPhone version directly from iTunes here and the Android version can be found in the Android Market.