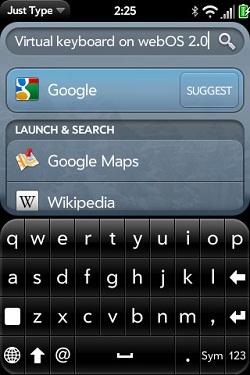 One of the biggest features we were hoping for with Palm webOS 2.0 was a virtual software keyboard but we haven’t heard much about this … until now.

The good folks at PreCentral did some digging with the latest webOS 2.0 software and found the virtual keyboard is alive and well. It’s still kind of a hack though, “Using a Palm Pre 2, WebOS Internals went ahead and dug into the portion of webOS 2.0, entered “VirtualKeyboardEnabled=true” and after a UI restart hit Opt+Sym+K to bring up the software keyboard you see above.”

This is good news for multiple reasons, as the Pre had a decent, if small keyboard, but you didn’t always want to pop it open to send out a quick text or to put in a URL. Additionally, this meant you were kind of limited when holding the device in landscape mode.

Additionally, the virtual software keyboard on Palm webOS 2.0 enables multiple form factors. This is important because we know that HP, which now owns Palm, is planning to use webOS in a variety of devices and some of those won’t have physical keyboards.

We know that Palm is planning a full touch device dubbed “Mansion” which should have a 5-inch screen. A virtual software keyboard is a must for this type of smartphone.

The IntoMobile team is also very excited about the possibility of a tablet with this operating system. The so-called PalmPad is expected to go head to head with the Apple iPad, Playbook and a glut of Android tablets and all of these should have decent specs with similar capabilities. Little things like how you input text on these devices could wind up playing a major role in how these devices are accepted by consumers.

There’s no word on when Palm will officially unwrap this but check out the video below and hit the via link for instructions on how to do it yourself.

Nielsen: webOS market share now at 1.3% in the US

Palm and HP presumably have a plan to lift webOS out of its abyss, but recent U.S. smartphone market analysis...