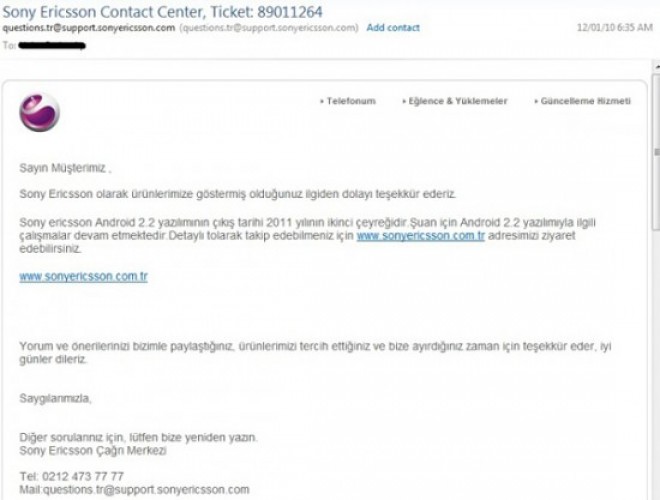 While many are still awaiting Android 2.1 Eclair for their Xperia X10‘s, we’re now hearing that Sony Ericsson may already hard at work getting some Froyo on the handset. Well, maybe.

We know that Japanese-Swedish smartphone-maker isn’t the only one suffering from long software update cycles, thanks to all the extensive testing that needs to be done before they can send it out to handset owners. That said, we’re super excited to see that the X10 may not be done with Android updates after all. “May” being the active word there. Hell, I’m sure most users will just be happy to get multitouch capabilities on the thing, let alone an OS update.

This rumors comes from a customer service representative in Turkey, and claims that the Froyo update may begin rolling out to handsets sometime in Q2 in 2011.We still can’t take this too seriously, though we’d like to. At this point in time, there are just too many other compelling devices to choose over the X10 these days, and those who buy the handset should know what they may be getting themselves into. Even if the Xperia X10 does get the Froyo update, who knows, maybe a majority of other handset will have Gingerbread by that time.

For now, users can revel in the smallest of possibilities that the X10 will get some Froyo love in the near future, as it could give the handset a much needed speed boost, even with that Snapdragon processor on board.

We’ll be sure to stay on top of this one and see if there indeed is any truth behind the rumor.

Nexus One to get Android 2.3 Gingerbread in the next few weeks

It's Google day in the Android world as the Mountain View company unveiled the Nexus S and unleashed the Android...