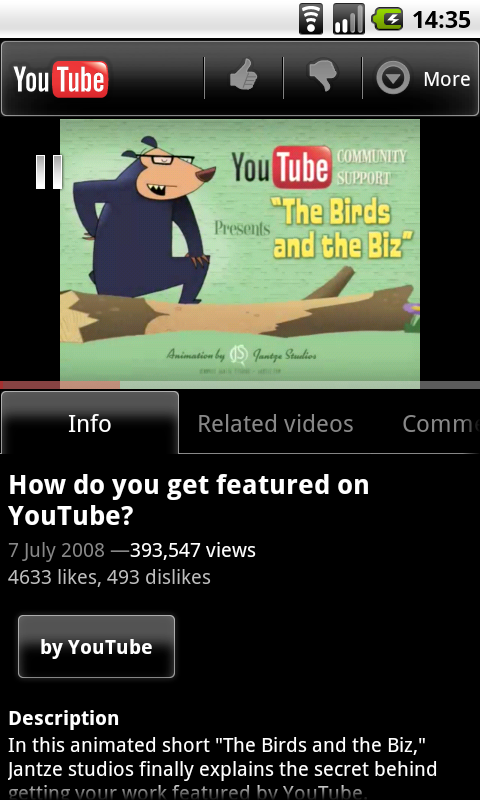 Google has just released a new version of their YouTube client for Android devices. Sadly it only runs on hardware that sports version 2.2 of Google’s mobile operating system, but according to data released last week over 43% of Android devices on the market have 2.2 on board. So what’s new in version 2.1? Easily the most impressive feature is the ability to watch a video while also being able to interact with the data about said video, about the user who uploaded said video, and even see related videos. Flipping your device to the side activates full screen mode, you can also view subtitles now, and you can even comment … not that YouTube comments are ever worth reading anyway. Oh and if you’re a heavy user of subscriptions you’ll be pleased to know that you’ll easily be able to consume content and even subscribe to new channels all from the palm of your hand.

With this update Google is demonstrating how important it is to not couple your core applications with the platform itself. We’ve seen GMail get updates independent of the version of Android you’re running, Maps, and now YouTube. Hopefully one day we’ll see the browser torn out of the operating system and get updates on a regular basis similar to how the Chrome browser operates on desktop computers.

Check out the video demo below of YouTube 2.1 running on a Nexus S and notice how smooth and fluid the whole user experience is. It almost makes me want to pick up that smartphone, but I know that dual core is right around the corner, so I’ll just sit in my chat and patiently wait for the next generation of Android devices to hit the market. Hopefully by then we’ll be able to stream 720p or even 1080p videos from YouTube to our devices.

Andy Rubin, creator of the Android startup that got bought up by Google and was then transformed into a success...