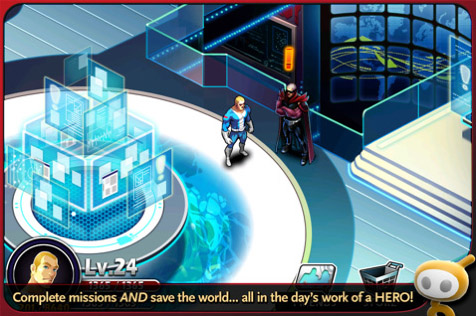 Glu Mobile launched Hero Project for the iOS-powered devices, allowing users to create their own super hero and “defeat the forces of evil.” The plot is already seen before, but the ability to custom make your own super hero is a novel idea… at least in the mobile realm.

The man behind the concept is infamous design consultant Phil Campbell, whom you may know for its other work like Tomb Raider, The Godfather and Heavy Rain.

Depending on your skill level and super hero’s special powers, you will be able to punch, zap and blast evil doers. The outcome of the battle is determined based on your choice of offensive, defensive and healing powers.

You go to the Mission Central to accept latest missions, while the Research Lab is used for harvesting crystals and Rec-Con for checking how your friends’ heroes are doing.

In total there are over 200 story-driven missions that move the story forward. To succeed, you’ll need to purchase additional equipment, costumes, super powers and other unique items in the store — and that’s how Glu makes its money – via in-app purchases. The game itself is available as a free download…

How the Grinch Stole Christmas! and The Cat in the Hat Released hit the Android Market

With Christmas around the corner, everyone is getting super busy. You need to buy gifts, decorate your house and play...