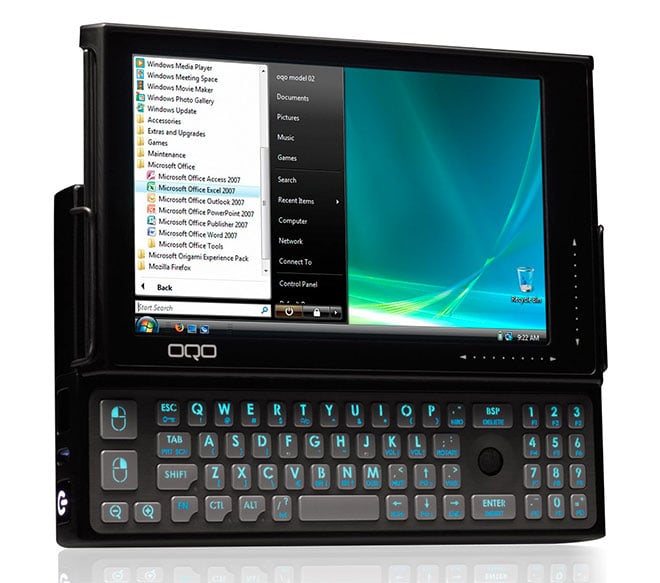 Microsoft CEO Steve Ballmer is reportedly ready to unveil a handful of tablet devices when he takes the stage to deliver his keynote presentation at CES 2011. The devices to be presented include tablets from Samsung and Dell. The Samsung device is thought to be a 10-inch device with a form factor that is slightly thicker than the iPad. This extra thickness is due to the presence of a slide out keyboard included to make typing easier on the tablet device. The model from Samsung is expected to be powered by Windows 7. Another slate device on hand may be powered by Windows 8, the next generation of Microsoft’s desktop operating system.

This is not the first time Microsoft has presented a tablet device at CES. Founder Bill Gates introduced an early version of the tablet back at CES 2000 and unveiled the OQO model 02 (shown above) in 2007. Fast forward to 2010 and you will remember that Ballmer introduced the Windows 7-powered HP Slate at his CES 2010 keynote presentation. The slate was only partially operational and its presentation seemed a hastily put together response to Apple’s iPad, which at the time of CES was heavily rumored but not yet confirmed.

Unfortunately, Microsoft appears to not have learned its lesson from the failed Origami project. Launched in 2006, the Origami project was an initiative by Microsoft to put its Windows XP Tablet PC edition onto tablet devices. Several models of tablets were produced between 2006 and 2009 but the concept of a Windows-powered tablet failed to take off. On factor in the demise of  these Ultra-mobile PCs was the poor touch performance of a Windows-based device. Windows is a desktop operating system that does not translate easily to tablet form factor. It’s slow to boot and often requires the use of a stylus. This Windows experience is awkward and slow when compared to the experience delivered by iOS and Android.

Little is known about Zetawire, a company that Google just purchased according to The 451 Group. They're Canadian, based out...