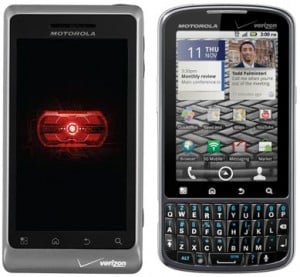 A report circulating out of Engadget early this morning suggests the DROID 2 Global and the DROID Pro are being pulled from the shelves of Best Buy. According to the report, Verizon is refusing to activate either one of these DROID handsets when they are purchased from the electronics retailer. In response, the electronics retailer supposedly issued a stop-sale order on the handsets and the word “recall” was tossed around with this report.

The tale gets even more confusing with allegations that this recall was the result of Best Buy slashing the prices on these two handsets. The retailer is selling the subsidized DROID 2 Global and the DROID Pro for a lowly $100 and $50, respectively. In comparison, Verizon is sell the DROID 2 Global for $199 and the DROID Pro for $179. Best Buy’s fire sale supposedly violates an agreement the retailer had with Verizon and the retailer has been forced to pull all handsets from the shelves.

Fast forward several hours and another report has surfaced that debunks this recall. Phone Scoop contacted Verizon for an official statement and spokesperson Brenda Rainey had this to say about the Best Buy situation:

“We can’t speak for Best Buy — but both the DROID Pro or the DROID 2 Global are popular sellers. How they manage their inventory is their business but there are no recalls on those devices.”

While there may not be a recall on the handsets, the electronics retailer is reportedly pulling them from the shelves for an unknown reason. Until this situation is sorted out, prospective buyers may want to call Best Buy to confirm they have inventory or shop at a Verizon store. We will update this post with new information as this story continues to unfold. Stay tuned.

[Via Engadget and Phone Scoop]

The Vlingo voice control app for Android has been updated to include integration with some new services, and a new...