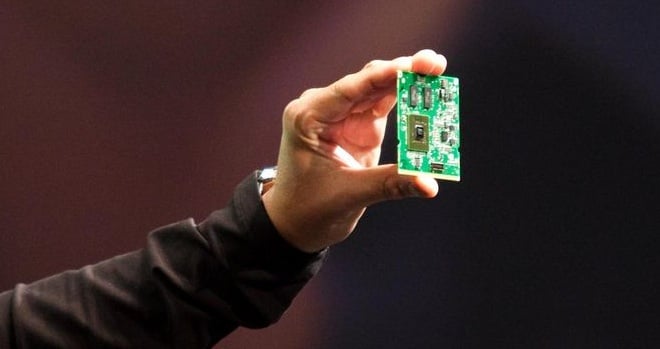 Citigroup’s Glen Yeung recently published a research note that says Samsung may have placed an order for NVIDIA Tegra 2 chips that’s worth between $250 million and $350 million. The chips are meant for both tablets and smartphones, and if his numbers are right Samsung may have bought practically all the Tegra 2 chips that NVIDIA plans to produce in 2011. Before we tear this rumor apart, let’s explain what a Tegra 2 actually is. NVIDIA, like most other chipset manufacturers, calls ARM and asks them if they can build a platform using one of their advanced mobile processors. In NVIDIA’s case the Tegra 2 packs a dual core ARM Cortex A9 processor. Then you need to slap all the other parts of the chip onto the same piece of silicon, the parts that make a smartphone work. Since NVIDIA knows a thing or two about graphics hardware, they shoved their own graphics chip inside there, along with nifty optimizations for HD video encoding and decoding.

Now here’s why I think this rumor is false. Samsung is an expert at making their own chips; they even make the chips that Apple uses in their iPad, iPhone 4, iPod touch, and Apple TV, so why in the world would they buy chips from NVIDIA when they can not only design something that’s probably faster and consumes less power, but is also cheaper since there’s no middle man? Samsung already has a dual core processor called Orion that’s due to hit the market soon and it packs the same dual core ARM Cortex A9 processor that’s inside the Tegra 2, along with a graphics processor that’s slated to be 5x faster than what’s inside current Hummingbird based devices such as the Google Nexus S, Samsung Galaxy Tab, and all the other Galaxy S devices out on the market. Not only that, but Orion is due to enter the mass production phase during the first half of 2011.

So tell me again, why would Samsung build products with NVIDIA chips?

ChangeWave released results of its November survey which it conducted among 1,641 business IT buyers to give us a close-up...