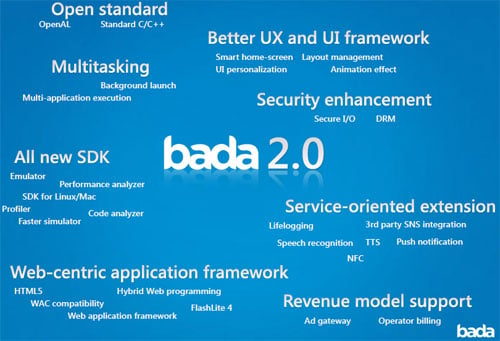 Samsung’s own operating System, bada, is due for a 2.0 upgrade in 2011, which will host a bunch of new features. The most notable among them is near-field communications, a feature Android recently adopted for 2.3 Gingerbread, but Bada 2.0 will include a lot of other stuff, like multitasking, SDKs for Mac and Linux, FlashLite 4 support, push notifications, and lots of other stuff listed above. This slide comes from a bada developer day where Samsung also announced the winners of an app contest.

Bada is seen on Samsung’s Wave phones, which, though technically smartphones, still harken to the TouchWiz UI used on their feature phone lineup. I used the original Wave for a little while, and the UI was nice and smooth, and the widget system reasonably useful, but the real challenge is convincing developers to make apps for yet another platform. It looks like Bada 2.0 will be offering a decent array of goodies, and NFC in particular will enable a unique breed of apps that even the leading smartphone OSes are still working to implement. If Samsung can churn out supporting hardware in good time, then they may start carving out a decent niche for NFC apps, like contactless payments and other unforeseen uses.

If you're not excited about the upcoming CES yet, then take a look at the video below because Motorola will...